The "Terahertz Gap" Between Lasers and Antennas

"Terahertz radiation has very useful properties," says Claudia Gollner from the Institute of Photonics at TU Wien. "It can easily penetrate many materials, but unlike X-rays, it is harmless because it is not ionising radiation".

From a technical point of view, however, terahertz radiation is located in a frequency region which is very hard to access - in sort of a no man's land between two well-known areas: Radiation with higher frequencies can be generated by ordinary solid-state lasers. Low-frequency radiation, on the other hand, as it is used in mobile communications, is emitted by antennas. The greatest challenges lie exactly in between, in the terahertz range.

In the laser laboratories of TU Wien, a great deal of effort must therefore be put into generating the desired high-intensity terahertz radiation pulses. "Our starting point is the radiation of an infrared laser system. It was developed at our Institute and it is unique in the world," says Claudia Gollner. First, the laser light is sent through a so-called non-linear medium. In this material, the infrared radiation is modified, part of it is converted into radiation with twice the frequency.

"So now we have two different types of infrared radiation. These two kinds of radiation are then superimposed. This creates a wave with an electric field with a very specific asymmetric shape," says Gollner.

This electromagnetic wave is intense enough to rip electrons out of the molecules in the air. The air turns into a glowing plasma. Then, the special shape of the wave's electric field accelerates the electrons in such a way that they produce the desired terahertz radiaton.

"Our method is extremely efficient: 2.3% of the supplied energy is converted into terahertz radiation - that is orders of magnitude more than can be achieved with other methods. This results in exceptionally high THz energies of almost 200 μJ," says Claudia Gollner. Another important advantage of the new method is that a very broad spectrum of terahertz radiation is generated. Very different wavelengths throughout the terahertz range are emitted simultaneously. This produces extremely intense short radiation pulses. The larger the spectrum of different terahertz wavelengths, the shorter and more intense pulses can be generated.

"This means that for the first time a terahertz source for extremely high intensity radiation is now available", says Andrius Baltuska, the head of the research group at the Vienna University of Technology. "Initial experiments with zinc-telluride crystals already show that terahertz radiation is excellently suited to answer important questions from material science in a completely new way. We are convinced that this method has a great future." 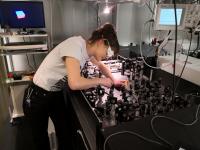