Existing gender categories in sport should perhaps be abandoned in favour of a more "nuanced" approach in the new transgender era, University of Otago researchers say.

The International Olympic Committee (IOC) guidelines that allow male-to-female transgender athletes to compete in the women's category at the elite level has raised significant debate since being introduced in 2015. A recent case of New Zealand weightlifter Laurel Hubbard, a transwomen competing in the 2018 Commonwealth Games, has polarised opinions about the inclusion of transwomen in women's sport.

Bioethicist, Associate Professor Lynley Anderson, says that in discussing this topic we need to consider the principles of inclusion and fairness.

Associate Professor Anderson and Dr Taryn Knox from the Dunedin Bioethics Centre, together with Otago physiologist Professor Alison Heather investigate the ethics and science around the IOC's decision in research published in the latest issue of the Journal of Medical Ethics.

They explain the recent IOC guidelines allow transwomen to compete in the women's division if (amongst other things) their testosterone is held below 10nmol/L.

Professor Heather says this is significantly higher than that of cis-women [whose sex and gender align as female].

"Science demonstrates that high adult levels of testosterone, as well as permanent testosterone effects on male physiology during in utero and early development, provides a performance advantage in sport and that much of this male physiology is not mitigated by the transition to a transwoman," she says.

Far from arguing that transwomen be excluded, the authors are in favour of a radical change to what they describe as "the outdated structure of the gender division currently used in elite sport".

They consider possible solutions in their research however, some options value inclusion more than fairness and vice versa. The potential solutions include excluding transwomen from competing in the women's division, creating a third division for transwomen and intersex women and calculating a handicap for transwomen based on their testosterone levels - similar to that used in golf.

Their preferred option is an extension of this with a proposed algorithm that could account for a range of parameters, both physical and social, including pyshiological parameters, gender identity and could include socioeconomic status.

Associate Professor Anderson says it is important to both extend and celebrate diversity while maintaining fairness for cis-women in sport.

"To be simultaneously inclusive and fair at the elite level some innovative thinking is required, rather than attempting to shoehorn people into either 'male' or 'female'.

"Perhaps the male/female binary should be reconsidered in favour of something more nuanced and useful?," she questions.

"We conclude that the gender binary in sports has perhaps had its day." 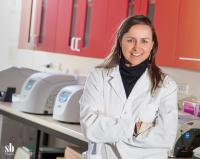