Scientists have reconstructed the tree of life for all major lineages of perching birds, also known as passerines, a large and diverse group of more than 6,000 species that includes familiar birds like cardinals, warblers, jays and sparrows. Louisiana State University (LSU) researchers led the massive project using 221 bird specimens from 48 countries, including 56 tissue samples from the LSU Museum of Natural Science's Collection of Genetic Resources. Using these samples, they extracted and sequenced DNA representing all passerine families, and they used these sequence data to understand how passerine species are related and to study when and how passerines diversified in relation to Earth's history.

"In addition to inferring how these species are related, our in-depth study found that changes in global temperature or colonization of new continents were not the sole drivers of passerine diversification, as previously suggested. Instead, our results indicate more complex mechanisms were at play to spark bursts of passerine speciation around the globe," said lead author Carl Oliveros, a postdoctoral researcher in the Department of Biological Sciences at LSU.

"In our on-going work piecing together the evolutionary history of all bird species, natural history museum research collections like the one we have here at the LSU Museum of Natural Science have been absolutely essential. By sequencing DNA from these invaluable specimens using new technologies, we can begin to understand how species evolved over the course of millions of years at a resolution that is unprecedented," said co-author Brant Faircloth, an assistant professor in the LSU Department of Biological Sciences and a faculty associate at the LSU Museum of Natural Science.

This study will be published in PNAS on April 1 and is the first publication from OpenWings, a research project supported by the National Science Foundation whose goal is to reconstruct the evolutionary history of all bird species.

"This study showcases the critical importance of museum collections in explaining the living world," said David Cannatella, a program director at the National Science Foundation, which funded this research. "By integrating modern, cutting-edge analysis of bird specimens with the legacy of natural history, the authors have uncovered valuable insights into how Earth history has influenced species diversity and what it means for the future of life on Earth."

"This study is an exciting prelude to the types of analyses we can do for all bird families and all bird species, moving into the future," Oliveros said. 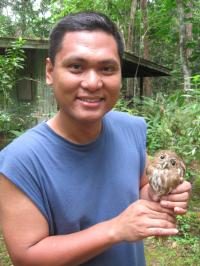