A new paper to be published in the journal Zootaxa (April 6, 2015) describes 30 new insect species in a single genus, Megaselia, of the fly family Phoridae. Describing 30 species in a single paper is rare, but what's especially striking is that all these come from urban Los Angeles.

The discoveries come from researchers in the BioSCAN project (Biodiversity Science: City and Nature) at the Natural History Museum of Los Angeles County (NHM). The BioSCAN project is a three year investigation of patterns of biodiversity in and around urban Los Angeles, based on sampling the world's most diverse fauna: insects. Local residents participate in the study by hosting one of the 30 sampling sites, each of which has a continuously operating insect trap and a microclimate weather station. Every household's set of samples yielded at least one of the 30 new species, prompting the researchers to name each species after the resident in whose back yard the species was found.

The project is yielding an unprecedented biodiversity collection, consistently accumulated across space and through time, curated for permanent research availability at NHM. Lead author Emily Hartop, an entomologist at NHM, examined over 10,000 specimens of phorid flies from three months of the samples to find these 30 new species. This result clearly demonstrates the extraordinary level of biodiversity that remains to be discovered even in heavily human-influenced areas.

Most people in the world now live in cities, and the ecology of those cities is an increasingly important focus for academic and museum researchers. Urban biodiversity is immediately important to humans -- urban ecosystems deliver ecosystem services critical for human survival right where people live. The public and, it must be admitted, the research community, have long assumed that biodiversity discoveries happen only in exotic, undisturbed locales. That turns out not to be the case.

Dr. Brian Brown, Curator of Entomology at NHM and principal investigator of BioSCAN, has extensive experience exploring and discovering insect biodiversity in tropical areas like Costa Rica. Goaded by a bet with an NHM trustee, he set out to prove that he could discover a new species in a Los Angeles backyard. When the very first specimen he examined from a trap in that urban backyard turned out to be a new species, Dr. Brown was inspired to pursue a deeper investigation of Los Angeles urban biodiversity, leading to the BioSCAN project. "I always thought we had the potential to discover new species wherever we sample -- urban, tropical, anywhere. But 30 new species from a heavily urbanized area is really astounding," Dr. Brown said.

To plan for an urban future that incorporates a fully functioning support ecosystem, we need to know how to manage urban biodiversity. To do that, we need studies like BioSCAN to help us understand just how urbanization a?ects biodiversity. Emily Hartop, lead author on the paper describing the new species, is excited by the implications of this seemingly simple result: "Right now we're finding out what's here -- and it's more than we ever expected. By linking these biodiversity results with the physical data we're collecting at these sites, we'll be able to contribute directly to the policy discussion of how best to plan and manage urban biodiversity."

More details on Emily Hartop's journey to 30 new species can be found at the BioSCAN post on "How I Discovered 30 New Species of Flies in Los Angeles": http://research.nhm.org/bioscan/bioscanbuzz/?p=706

A key component of the BioSCAN project has been the enthusiastic support of the urban sampling site hosts. Biologists, used to being able to sample fairly freely in undeveloped areas, find themselves stymied by private property restrictions in urban settings. But the eagerness of Angelenos to help the project has turned that "problem" into an advantage. Not only are the researchers getting the long-term sampling sites they need, urban residents are now part of the research enterprise.

Site host Walter Renwick said: "For us, it seemed like a no-brainer. We have two young bug-crazy children, a bug-crazy dad, and very patient mom in our household. We have ample space in our backyard and plan to stay in our home for at least another 3 years, if not longer. Even so, we were still a bit shy to commit, but with one visit from NHM staff, a mock-up of the trap, and we were sold!"

These site hosts are making it possible for BioSCAN to achieve its sampling goals, making the discovery of these30 species possible. In recognition of that, each species is named in honor of the hosts of the site where it was found. 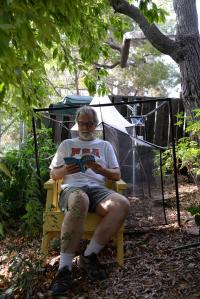