HOUSTON - (Dec. 2, 2019) - A tiny termite might see an elephant's foot as its biggest threat. But when elephants and other large herbivores are lost to hunting, the termite's troubles are just beginning.

Rice University scientists were surprised to learn the extent to which declines of large mammals like elephants, buffaloes and gorillas in hunted areas of an African forest were linked to changes in the population of the tiny-but-important insects.

A study by Rice ecologist Amy Dunham and graduate student Therese Lamperty, published in Biological Conservation, reported that in African rainforests where large animals are hunted, the abundance of termites falls by 170 times.

Even in an environment that is home to an estimated 10,400 termites per square meter, that's a significant drop, according to the researchers. Termites, they reported, are important ecosystem engineers responsible for plant decomposition, carbon flux and the physical properties of the soil, and serve as a key food resource for other denizens.

And while they're not the only organisms affected by the winnowing of the elephant herd, they serve as a worthy bellwether of how any change in an ecosystem might influence the whole.

Lamperty, who led the study as part of her Ph.D. research, was aware that earlier studies found termites are sensitive to habitat change. "I was kind of thinking we might find something there," she said. "But when we looked at herbivore dung from elephants and other animals, the difference between the heavily hunted areas and the protected areas was pretty stark. That's a food source for termites, so it makes sense."

When megafauna like elephants are removed from the environment, termites lose both deadwood from trampled brush and their dung as nutrients, Lamperty said.

The study also found that where elephants and other megafauna disappear, the forest floor becomes dense with vegetation, providing a platform for increased numbers of web-building spiders. These in turn eat such flying insects as pollinators and are themselves a food source for insectivorous birds. That may also have consequences for the ecosystem that require further scientific study, she said.

Lamperty spent three months in 2016 in the inland rainforests of the central African nation of Gabon. There, she set up experiments in established study plots in preserved and hunted regions of the forest to see how the presence or absence of large herbivores influenced the ecosystem.

Gabon was a good site for the survey because of the juxtaposition of protected forests with areas near settlements that are hunted. "It's one of the few countries that has a sizable amount of continuous forest left that can support megafauna like forest elephants," Dunham said. "When you have large animals like elephants that have disappeared from a forest, you're likely to have some cascading impacts, and these small things that run the world, the insects, are likely to be affected.

"If you go into a forest that's been hunted, you can see differences right in the understory because you don't have these big things trampling and eating all the vegetation," she said. "So we expected we'd see differences in the vegetation, but didn't know what was likely to happen to the invertebrate populations. The termites caught us off guard."

Lamperty set her experiments in 11 regions of forest in northeastern Gabon at least 1.8 kilometers apart, five of them in protected and six in hunted forest. At each site, she established three plots and collected invertebrate samples in pitfall traps, cups placed with their lips at ground level and filled with ethanol to preserve whatever creatures fell in.

A bit of positive news was that the level of rainforest defaunation -- the disappearance of large vertebrates -- could not be used to predict the potential decline of several measured ecosystem processes, suggesting such systems have functional redundancy and mechanisms in place to prolong their survival. "I guess it's comforting in a way that there seems to be some compensation," Dunham said.

She said further studies should be conducted to quantify the effect of termite decline on animals that depend on them for food, and the roles that termites provide for a healthy ecosystem. Such studies could also reveal a tipping point beyond which those buffer mechanisms are no longer effective.

"It's really important to try to understand the consequences of hunting beyond the direct loss of hunted animals," Dunham said.

A Wagoner Fellowship supported the research.

This news release can be found online at https://news.rice.edu/2019/12/02/in-hunted-rainforests-termites-lose-their-dominance/

https://news-network.rice.edu/news/files/2019/11/1124_ELEPHANT-1-WEB.jpg
Rice University graduate student Therese Lamperty spent three months in Gabon in 2016 to study how the presence or absence of megafauna like elephants affected some of the smallest creatures in the ecosystem. (Credit: Photo courtesy of Therese Lamperty)

https://news-network.rice.edu/news/files/2019/11/1124_ELEPHANT-2-WEB.jpg
Rice University graduate student Therese Lamperty with Prince Mokuoapamba, a master's student at Masuku University of Science and Technology in Franceville, Gabon. Lamperty studied how the presence of megafauna like African forest elephants affected insect populations in preserved and hunted forests in Gabon. The study showed that termite populations in particular suffered when elephants are absent. (Credit: Photo courtesy of Therese Lamperty) 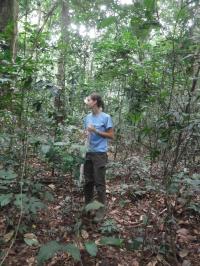