DURHAM, N.C. -- When monkeys landed in South America 37 or more million years ago, the long-isolated continent already teemed with a menagerie of 30-foot snakes, giant armadillos and strange, hoofed mammals. Over time, the monkeys forged their own niches across the New World, evolved new forms and spread as far north as the Caribbean and as far south as Patagonia.

Duke University evolutionary anthropologist Richard Kay applied decades' worth of data on geology, ancient climates and evolutionary relationships to uncover several patterns in primate migration and evolution in the Americas. The analysis appears online this week in the journal Molecular Phylogenetics and Evolution.

Today, more than 150 species of monkeys inhabit the New World, ranging in size from the pygmy marmoset, which weighs little more than a bar of soap, to the muriqui, a long-limbed monkey that tips the scales at 25 pounds.

"We know from molecular studies that the monkeys have their closest relatives in Africa and Asia -- but that doesn't explain how they got to South America, just that they did," said Kay, a professor in the evolutionary anthropology department and division of earth and ocean sciences at Duke.

South America split from Africa long before monkeys evolved, and the scarcity of monkey ancestors in the North American fossil record makes a southward migration highly unlikely. That's led scientists to speculate that the animals made the ambitious transatlantic crossing on a vegetation raft, perhaps hurled seaward by a powerful storm. Or, they could have hopped more gradually, using islands that now lie at the bottom of the ocean.

About 11 million years passed between their arrival and the first fossil evidence of monkeys in the Americas, leaving the details of their early evolution an unknown 'ghost lineage.' The humid, heavily forested environment of what is now the Amazon Basin has made both fossil formation and modern-day discovery difficult, but understanding what happened there is the key to New World monkey evolution.

"However they got to South America, they were evolving in the Amazon Basin, and from time to time they managed to get out of the basin," Kay said. "So if you want to learn about what was going on in the Amazon, you have to look at its periphery." Luckily, Kay said, scientists can do that in places like Chile and Patagonian Argentina, where he has worked collaboratively for the past quarter century.

"We know the Amazon has been warm and wet for a very long time, and that from time to time we got expansions and contractions of these climatic conditions, like an accordion."

The Amazon Basin functioned as a reservoir of primate biodiversity. When climate and sea level were just right, the animals spread and new species emerged in peripheral regions -- Patagonia, the Caribbean islands, Central America -- where the geology was more conducive to fossil preservation. Kay has uncovered and meticulously studied the monkey fossils from these areas to piece together their evolutionary relationships.

"The gold standard is molecular evidence," he said. By sequencing the DNA of living monkeys, scientists have come to a clear consensus of how the different species and genera are related. But genetic material deteriorates, so researchers studying extinct species must rely on a proxy: the minute differences in shape, size and structure in fossilized bones. "It's the only tool we have," said Kay, but "it does a pretty good job."

Kay studied 399 different features of teeth, skulls and skeletons from 16 living and 20 extinct monkey species from South America and Africa. Then, using software that reconstructs evolutionary relationships, he built a family tree. He compared that to a second tree, built strictly from the molecular studies of living species, to see if the two types of studies affirmed or contradicted one another. Except for a few cases, the trees looked remarkably similar, validating conclusions based on the anatomy of fossils.

Kay also looked at how long-term changes in South America's ancient climate, mountain-building and fluctuating sea levels might make sense of the evolutionary pattern revealed by the monkey fossils. His research zeroes in on when and how monkeys extended their ranges to the Caribbean islands and the far southern end of South America, which is thousands of miles south of where they now live and only 600 miles from Antarctica.

The analysis further explains why the lineages that evolved outside the Amazon Basin were evolutionary dead ends. When the climate in Patagonia, for instance, turned cool and arid, the primates there went extinct, leaving no living descendants. Within the past 6,000 years, monkeys of the Caribbean islands also went extinct as a result of the appearance of humans and/or sea level rise. The paper suggests these monkeys came from South America rather than Central America, floating there by chance, the same way their ancestors crossed the Atlantic.

This research was supported by National Science Foundation grants BNS-1042794 and BNS-0851272, as well as grants from the National Geographic Society and the Leakey Foundation. 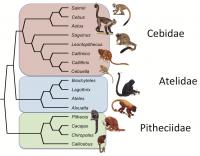