In this special issue, the editors of Science invite experts to provide closer looks at how natural and human-induced environmental changes are affecting forests around the world, from the luscious, diverse forests of the tropics, to the pristine, resilient boreal forests of the north. The special issue is complemented by a package from Science's news department.

Amid extreme environmental and climate changes, Susan Trumbore and colleagues highlight the urgency of monitoring forest health, especially considering humans' high dependence on these biomes, which drive biodiversity, regulate the carbon cycle, and provide numerous resources; however, many factors that make up forest health are intricately at play and not always easily identifiable. For example, a large forest fire may have been ignited by human activity, but its intensity could reflect drought conditions. Teasing apart the various forest health indicators and properly accounting for these in models is of the upmost importance, Trumbore et al. conclude.

In a second Review, Sylvie Gauthier et al. discuss the traditionally resilient boreal forest, which now faces unprecedented rates of change and new threats - warmer temperatures could expand the range of pests and a drier climate could lead to extensive forest cover thinning, or loss. The authors suggest that sustainable management practices, such as adequate timber supply planning, are necessary to preserve the biodiversity of boreal forests, which currently act as a major carbon sink.

In another Review, Constance Millar and Nathan Stephenson analyze the increasingly prevalent combination of persistent drought and higher temperatures, which is pushing some temperate forests beyond thresholds of sustainability. While trees have withstood periods of drought for millennia, the authors note that recent increase in the occurrence of "hotter" droughts is testing trees' ability to survive new extremes. Forest fires, and "megafires" in particular, are a major concern, and could cause severe transformation of the temperate forests of today. The authors suggest that advanced identification of vulnerable forests and effective management intervention could ease the transition to new and better-adapted forest states.

A fourth Review by Simon Lewis and colleagues looks at the impact of humans on tropical forests, which play a critical role in regulating the global climate through water transpiration, cloud formation, and atmospheric circulation. Extensive logging has left fragmented areas of tropical forest, disrupting population dynamics and driving a subsequent decline in species. The authors highlight several examples of how humans have triggered a cascade effect of extinction in tropical forests, particularly if species that disperse seeds are affected. This severe degradation of tropical forests will continue, unless new "development without destruction" pathways are established, the authors say. Finally, a Review by Michael Wingfield et al. examines the particular susceptibility of plantation forests, given their uniform nature, to pathogens and insect pests. Globalization is compounding this issue, and while there are some solutions, especially through genetic engineering, to protect these forests, the authors cite lack of investment, capacity, and coordination of efforts at a global level as barriers.

A collection of news pieces bring these issues to life, highlighting forest health problems that are currently afflicting trees around the world. A piece by Gabriel Popkins tells the story of the eastern hemlocks of North America, which have mostly been reduced to leafless gray skeletons by the hemlock woolly adelgid (Adelges tsugae); left unchecked, this insect kills nearly every hemlock tree it attacks - but intense efforts in combination with science have spared a few trees from this fate. Another article by Tim Appenzeller looks at how boreal forests are - or are not - recovering in terms of biodiversity following megafires, such as the one that hit Canada's Northwest Territories last year, which are becoming increasing prevalent. A third news feature, by Elizabeth Pennisi, follows prominent forest ecologist Robin Chazdon, who has spent decades studying the difference between planted forests and natural recovery, and is now focusing at the policy level to try and reshape the way we approach reforestation.

In a Policy Forum that looks for answers to improve forest health, Steven Struass et al. discuss the benefits of genetically engineered trees to counteract pests compared to the slower, traditional crossing of seeds. The authors call for a better regulatory approach that would enable agencies to fast-track or exempt field research with a genetically modified product in given scenarios. An editorial by Ariel Lugo argues that foresters and ecologists must share the responsibility of forest research and conservation with other professionals from the natural and social sciences, in order to achieve optimal forest health. Together, this collection on forest health highlights the importance and susceptibility of one of land's most crucial plants in the face of a changing climate. 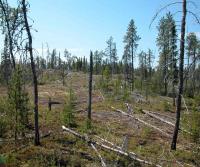 Fire Spreading across a Boreal Forest