RIVERSIDE, Calif. – The Asian citrus psyllid (ACP) is an efficient vector of a bacterium that causes a lethal citrus disease, huanglongbing (HLB), one of the most destructive diseases of citrus worldwide.

ACP-HLB is a serious threat to California's annual $2 billion citrus industry. This insect-disease combination has cost Florida's citrus industry $1.3 billion in losses, and production costs have increased by 40 percent.

Now a research team at the University of California, Riverside has targeted the olfactory system of the psyllid, and identified a suite of odorants – odor molecules – that the ACP olfactory system detects. Some of these odorants can modify the behavior of ACP and lead to the development of tools to tackle its spread worldwide, the researchers report.

"The ACP olfactory system is sensitive to a variety of odorants released by citrus plants. This presents an opportunity to develop attractants and repellents using odors," said Anandasankar Ray, an associate professor of entomology and the director of the Center for Disease Vector Research, who led the research project.

Ray explained that the ACP detects citrus plant odors using tiny pit-like sensors (containing neurons) on its antenna. His lab performed a large-scale analysis of numerous citrus emitted odors and identified those odors that strongly activate the citrus odor sensitive neurons on the ACP antenna. Then, using a blend of activating odorants, the researchers developed an efficient attractant that could lure ACP to yellow sticky traps.

"We anticipate that this odor-based insect lure could be of use to growers in California and other parts of the world where ACP invasion is occurring," Ray said.

Study results on the lures appear in the Oct. 27 issue of PLOS ONE. The large scale identification of odors that are detected by ACP appears in the 39th issue of Chemical Senses. Both studies were funded by the California Citrus Research Board.

One of the major gaps in ACP control is the lack of effective surveillance traps to track the rapid spread of these highly invasive insects that are fast spreading globally. Currently, HLB is mostly managed by spraying insecticides and swiftly removing infected trees. But if the ACP develops insecticide resistance, commercially managed citrus groves could be in jeopardy. Further, abandoned citrus groves could become prolific reservoirs of HLB.

The blend of odors Ray and his team of researchers identified consisted of myrcene, ethyl butyrate and p-cymene – odors found in nature. To test whether this blend was indeed effective as an attractant, Ray and his team of researchers performed field trials, spread over 10weeks, in citrus trees located in backyards in a residential neighborhood in El Monte, Calif. They found that the odor-based yellow traps caught nearly 230 percent more ACP than conventional yellow traps placed on the same trees.

"What's particularly encouraging is that these three chemicals are affordable, useful in small quantities and safe for human handling," Ray said. "They could be developed into monitoring and surveillance tools. Similar approaches can be taken to develop control strategies using odors for other insect pests of crops as well. Our study also reports identification of odors that block the ACP olfactory system from detecting citrus odors and have potential for development into repellents."

The Ray Lab has already identified odor molecules that can severely impair, if not completely disrupt, the carbon dioxide and skin-odor detection machinery of mosquitoes. Recently his lab discovered the receptor proteins in insects that detect the repellent DEET and used it to identify several naturally occurring, pleasant smelling odor repellents for mosquitoes and flies that were better than DEET. Both are approaches that can help control the spread of diseases mosquitoes transmit – malaria, dengue, yellow fever, filariasis and West Nile virus.

Besides California, ACP and HLB are found in Florida, Louisiana, Georgia, South Carolina, the Caribbean, Central America, and large parts of Mexico and Brazil.

When the ACP feeds on leaves and stems, it injects the bacterium into the trees and, within a few years of infection, the leaves turn yellow and the fruit becomes misshapen and bitter. The tree dies within 5-8 years of infection.

Ray was joined in the PLOS ONE study by UC Riverside's Iliano V. Coutinho-Abreu, Lisa Forster and Tom Guda; and by Coutinho-Abreu, Forster, Shane McInally and Robert Luck in the Chemical Senses study.

The California Department of Food and Agriculture assigned the location for the field trials after securing permission from landowners for setting up traps. Toxicity information and exposure potential of the chemicals tested as lures were reviewed by the Office of Environmental Health Hazard Assessment, California Environmental Protection Agency.

The UCR Office of Technology Commercialization has filed a patent on the technology reported in the research paper, which has been licensed to ISCA Technologies. 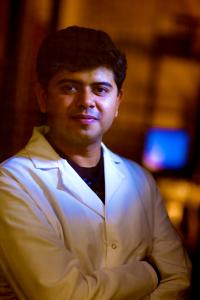