The winning postdoctoral researchers include a neuroscientist improving memory formation and recall, an astrophysicist illuminating dark matter, and a biochemist refining gene-editing technologies.

NEW YORK, September 23, 2020 — Today, during National Postdoc Appreciation Week, the Blavatnik Family Foundation and the New York Academy of Sciences announced the three Winners and six Finalists of the 2020 Blavatnik Regional Awards for Young Scientists. The Blavatnik Regional Awards honor outstanding postdoctoral scientists from academic research institutions across New York, New Jersey, and Connecticut and recognize researchers in three scientific categories: Life Sciences, Physical Sciences & Engineering, and Chemistry. A distinguished jury of leading scientists and engineers from across the New York region selects, in each category, one Winner, who is awarded a $30,000 unrestricted prize, and two Finalists, who are each awarded $10,000. For the 2020 competition, there were 154 outstanding nominations from 24 academic institutions in the New York metropolitan region (Tri-State area). The 2020 Blavatnik Regional Awards Winners and Finalists will be honored alongside the 2020 and 2021 Blavatnik National Awards honorees on September 27, 2021, at the American Museum of Natural History in New York.

The 2020 Blavatnik Regional Awards Winners are:

“Scientists strive to solve the world’s most urgent problems, leading to further discovery, innovation, economic growth, and societal progress,” said Len Blavatnik, Founder and Chairman of Access Industries, head of the Blavatnik Family Foundation, and member of the President’s Council of the New York Academy of Sciences. “Our nation’s thriving scientific ecosystem is reliant, to a large degree, on scientists and engineers coming to America to study and conduct research. I’m pleased that our 2020 honorees hail from multiple countries, highlighting yet again how essential it is for scientists the world over to work together to address humankind’s greatest challenges and improve the quality of life for everyone.”

Nicholas B. Dirks, the New York Academy of Sciences’ new President and CEO said: “Postdocs are the fuel running the engines of scientific research. We are incredibly proud to announce these outstanding postdoctoral Winners and Finalists of the 2020 Blavatnik Regional Awards, especially during National Postdoc Appreciation Week —a week dedicated to recognizing the significant contributions that postdoctoral scholars make to American research and discovery. The Academy, through administering programs for postdoctoral scientists such as the Blavatnik Regional Awards and Science Alliance, is committed to supporting these young investigators as they transition to the next stages in their career and beyond.”

The following postdoctoral researchers have been named Finalists in their respective categories:

About the Blavatnik Awards for Young Scientists

The Blavatnik Awards for Young Scientists, established by the Blavatnik Family Foundation in the United States in 2007 and independently administered by the New York Academy of Sciences, began by identifying outstanding regional scientific talent in New York, New Jersey, and Connecticut. The Blavatnik National Awards were first awarded in 2014, and in 2017, the Awards were expanded to honor faculty-rank scientists in the United Kingdom and in Israel. By the close of 2020, the Blavatnik Awards will have conferred prizes totaling over $10.2 million to 321 outstanding young scientists and engineers from more than 46 countries, representing 36 scientific and engineering disciplines. For updates about the Blavatnik Awards for Young Scientists, please visit www.blavatnikawards.org or follow us on Facebook and Twitter (@BlavatnikAwards).

The Blavatnik Family Foundation is an active supporter of world-renowned educational, scientific, cultural, and charitable institutions in the United States, the United Kingdom, Israel, Russia, and throughout the world. The Foundation is headed by Len Blavatnik, a global industrialist and philanthropist and the Founder and Chairman of Access Industries, a privately-held industrial group based in the US with global strategic interests. Visit: www.accessindustries.com or www.blavatnikfoundation.org.

The New York of Academy of Sciences is an independent, not-for-profit organization that since 1817 has been committed to advancing science for the benefit of society. With more than 20,000 Members in 100 countries, the Academy advances scientific and technical knowledge, addresses global challenges with science-based solutions, and sponsors a wide variety of educational initiatives at all levels for STEM and STEM related fields. The Academy hosts programs and publishes content in the life and physical sciences, the social sciences, nutrition, artificial intelligence, computer science, and sustainability. The Academy also provides professional and educational resources for researchers across all phases of their careers. Please visit us online at www.nyas.org. 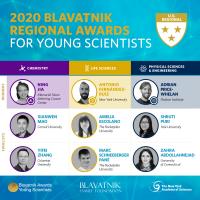