Cool-water corals can adapt to a slightly warmer ocean, but only if global greenhouse gas emissions are reduced. That's according to a study published November 1 in the journal Science Advances of genetic adaptation and the likely effects of future warming on tabletop corals in the Cook Islands.

The study found that some corals in the normally cool waters of the Cook Islands carry genetic variants that predispose them to heat tolerance. This could help the population adapt more quickly to rising temperatures. But the preliminary results show they may not adapt quickly enough to outpace climate change.

"These corals aren't going to adapt at an unlimited rate," said lead author Rachael Bay, a postdoctoral scholar at the University of California, Davis. "Keeping these reefs around requires curbing emissions."

In previous work, the researchers identified genes that make some individual corals more heat tolerant than others. In the current study, they found these warm water variants in corals in the Cook Islands, at low levels.

To test how well the corals could use these genes to adapt to future climate change, the scientists ran computer simulations based on projections by the U.N. Intergovernmental Panel for Climate Change. In a business-as-usual scenario, emissions continue to rise rapidly throughout the 21st century, and temperatures rise between 2 and 3.7 degrees Celsius. The least severe scenario is where warming does not exceed 1.8 degrees Celsius by 2100. In between is the moderate scenario suggested by the Paris Accord, in which emissions peak and then rapidly decline by about 2040.

In the simulations, coral could survive under the mild and moderate scenarios. But under the more severe scenarios, adaptation was not fast enough to prevent extinction.

This research focused specifically on tabletop corals. Further study is needed to understand the broader implications for other coral species.

"Many existing coral populations have a bank of adaptations that has been evolving for a long time," said co-author Steve Palumbi from Stanford University. "Those existing adaptations are an asset for them to survive longer and for us humans to benefit longer."

Reef-building corals are among the most vulnerable organisms to rising ocean temperatures. Over the past three years, coral reefs have experienced the worst bleaching and mortality events in recorded history, largely due to warmer waters.

"This sort of framework could be used for any population we want to help adapt to future climate change, whether it's corals or birds or insects," Bay said. "It's a way to integrate the genomic data to produce tangible, predictive outcomes."

The project was funded by the Stanford Office of International Affairs; Stanford Center for Computational, Evolutionary, and Human Genomics; the National Science Foundation; and the Gordon and Betty Moore Foundation.

Can corals adapt to climate change? 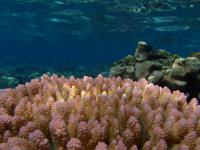 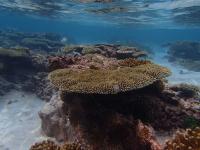