In a very severe, genetic form of microcephaly, stem cells in the brain fail to divide, according to a new Columbia University Medical Center study that may provide important clues to understanding how the Zika virus affects the developing brain.

The study was published August 24 in Nature Communications.

Due to the Zika virus, the world is suffering from its first known epidemic of microcephaly, a devastating brain developmental condition that substantially reduces the number of neurons in the brain, along with brain size and function at birth.

Mutations in a number of human genes have been implicated in causing the relatively rare occurrence of this disease. Mutations in one such gene - NDE1 (referred to as "nood-E") - cause a particularly severe form of microcephaly. The Columbia researchers -- David Doobin, an MD/PhD student, Richard Vallee, PhD, professor of pathology and cell biology, and others in Dr. Vallee's lab -- reasoned that investigating NDE1's role in microcephaly should provide important clues to the causes of microcephaly in general.

In the study, the researchers found that interfering with NDE1 expression severely inhibited the proliferation of stem cells in the developing rat brain. These stem cells, known as radial glial progenitors (RGPs), undergo rapid repeated divisions over the weeks-to-months-long process of brain development.

Other genes that cause microcephaly are known to impair RGP proliferation, usually by interrupting the cells when they are in the midst of dividing.

The new study found that NDE1 defects can stop RGPs before division even begins at three distinct arrest points. The net result is a complete failure of these cells to divide, explaining the severity of the NDE1-associated microcephaly.

Numerous labs are investigating the effects of Zika on the developing brain, and some studies already suggest that the virus targets RGP cells in the developing brain. Dr. Vallee's lab, along with that of Vincent Racaniello, PhD and Amy Rosenfield, PhD, in Columbia's Department of Microbiology, plan to test for similarities in the damage to neuronal stem cells caused by Zika virus vs. NDE1 mutations.

In some genetic cases of microcephaly, stem cells fail to launch 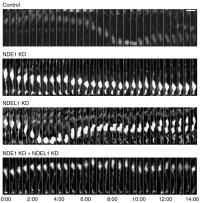