The Sun's magnetic activity follows an eleven-year cycle. Over the course of a solar cycle, the Sun's magnetic activity comes and goes. During solar maximum, large sunspots and active regions appear on the Sun's surface. Spectacular loops of hot plasma stretch throughout the Sun's atmosphere and eruptions of particles and radiation shoot into interplanetary space. During solar minimum, the Sun calms down considerably. A striking regularity appears in the so-called butterfly diagram, which describes the position of sunspots in a time-latitude plot. At the beginning of a solar cycle, sunspots emerge at mid-latitudes. As the cycle progresses, they emerge closer and closer to the equator. To explain this "butterfly diagram", solar physicists suspect that the deep magnetic field is carried toward the equator by a large-scale flow.

"Over the course of a solar cycle, the meridional flow acts as a conveyor belt that drags the magnetic field along and sets the period of the solar cycle", says Prof. Dr. Laurent Gizon, MPS Director and first author of the new study. "Seeing the geometry and the amplitude of motions in the solar interior is essential to understanding the Sun's magnetic field", he adds. To this end, Gizon and his team used helioseismology to map the plasma flow below the Sun's surface.

Helioseismology is to solar physics what seismology is to geophysics. Helioseismologists use sound waves to probe the Sun's interior, in much the same way geophysicists use earthquakes to probe the interior of the Earth. Solar sound waves have periods near five minutes and are continuously excited by near surface convection. The motions associated with solar sound waves can be measured at the Sun's surface by telescopes on spacecrafts or on the ground. In this study, Gizon and his team used observations of sound waves at the surface that propagate in the north-south direction through the solar interior. These waves are perturbed by the meridional flow: they travel faster along the flow than against the flow. These very small travel-time perturbations (less than 1 second) were measured very carefully and were interpreted to infer the meridional flow using mathematical modeling and computers.

Because it is small, the meridional flow is extremely difficult to see in the solar interior. "The meridional flow is much slower than other components of motion, such as the Sun's differential rotation", Gizon explains. The meridional flow throughout the convection zone is no more than its maximum surface value of 50 kilometers per hour. "To reduce the noise level in the helioseismic measurements, it is necessary to average the measurements over very long periods of time", says Dr. Zhi-Chao Liang of MPS.

The team of scientists analyzed, for the first time, two independent very long time series of data. One was provided by SOHO, the oldest solar observatory in space which is operated by ESA and NASA. The data taken by SOHO's Michelson Doppler Imager (MDI) covers the time from 1996 until 2011. A second independent data set was provided by the Global Oscillation Network Group (GONG), which combines six ground-based solar telescopes in the USA, Australia, India, Spain, and Chile to offer nearly continuous observations of the Sun since 1995. "The international solar physics community is to be commended for delivering multiple datasets covering the last two solar cycles", says Dr. John Leibacher, a former director of the GONG project. "This makes it possible to average over long periods of time and to compare answers, which is absolutely essential to validate inferences", he adds.

Gizon and his team find the flow is equatorward at the base of the convection zone, with a speed of only 15 kilometers per hour (running speed). The flow at the solar surface is poleward and reaches up to 50 kilometers per hour. The overall picture is that the plasma goes around in one gigantic loop in each hemisphere. Remarkably, the time taken for the plasma to complete the loop is approximately 22 years - and this provides the physical explanation for the Sun's eleven-year cycle. Furthermore, sunspots emerge closer to the equator as the solar cycle progresses, as is seen in the butterfly diagram. "All in all, our study supports the basic idea that the equatorward drift of the locations where sunspots emerge is due to the underlying meridional flows", says Dr. Robert Cameron of MPS.

"It remains to be understood why the solar meridional flow looks like it does, and what role the meridional flow plays in controlling magnetic activity on other stars", adds Laurent Gizon.

Motions in the Sun reveal inner workings of sunspot cycle 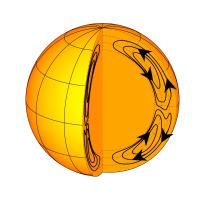 Meridional Flows in the Convection Zone 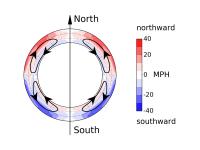 Measurements of the Sun's Meridional Flow