Results of the research were published today online in Journal of Alzheimer's Disease. Senior author Dr. Ozioma Okonkwo, assistant professor of medicine, is a researcher at the Wisconsin Alzheimer's Disease Research Center and the Wisconsin Alzheimer's Institute at the UW School of Medicine and Public Health. First author Ryan Dougherty is a graduate student studying under the direction of Dr. Dane B. Cook, professor of kinesiology and a co-author of the study, and Dr. Okonkwo. The research involved 93 members of the Wisconsin Registry for Alzheimer's Prevention (WRAP), which with more than 1,500 registrants is the largest parental history Alzheimer's risk study group in the world.

Researchers used accelerometers to measure the daily physical activity of participants, all of whom are in late middle-age and at high genetic risk for Alzheimer's disease, but presently show no cognitive impairment. Activity levels were measured for one week, quantified, and analyzed. This approach allowed scientists to determine the amount of time each subject spent engaged in light, moderate, and vigorous levels of physical activity. Light physical activity is equivalent to walking slowly, while moderate is equivalent to a brisk walk and vigorous a strenuous run. Data on the intensities of physical activity were then statistically analyzed to determine how they corresponded with glucose metabolism--a measure of neuronal health and activity--in areas of the brain known to have depressed glucose metabolism in people with Alzheimer's disease. To measure brain glucose metabolism, researchers used a specialized imaging technique called 18F-fluorodeoxyglucose positron emission tomography (FDG-PET).

"This study has implications for guiding exercise 'prescriptions' that could help protect the brain from Alzheimer's disease," said Dougherty. "While many people become discouraged about Alzheimer's disease because they feel there's little they can do to protect against it, these results suggest that engaging in moderate physical activity may slow down the progression of the disease."

"Seeing a quantifiable connection between moderate physical activity and brain health is an exciting first step," said Okonkwo. He explained that ongoing research is focusing on better elucidating the neuroprotective effect of exercise against Alzheimer's disease. To investigate this further, the team is recruiting individuals with concerns about their memory for a national clinical trial called EXERT to test whether physical exercise can slow the progression of early memory problems caused by Alzheimer's disease. For more information or to volunteer, contact exercise physiologist Beth Jeanes at 608-265-5752 or by email at emjeanes@medicine.wisc.edu. 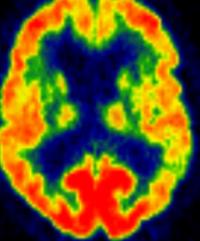