The dreaded shipworm is moving into the Baltic Sea, threatening artefacts of the area's cultural heritage. Researchers at the University of Gothenburg, Sweden, suspect that the unfortunate spread is due to climate change, and are currently involved in an EU project to determine which archaeological remains are at risk.

The shipworm is capable of completely destroying large maritime archaeological finds in only 10 years, and while it has avoided the Baltic Sea in the past, since it does not do well in low salinity water, it can now be spotted along both the Danish and German Baltic Sea coasts.

'The shipworm has for example attacked shipwrecks from the 1300s off the coast of Germany, and we are also starting to see its presence along the Swedish coast, for example at the Ribersborg cold bath house in Malmö,' says Christin Appelqvist, doctoral student at the Department of Marine Ecology, University of Gothenburg.

Appelqvist and her colleagues believe that the development may be due to climate change. In short, the increased water temperature may help the shipworms to become adapted to lower salinity. The group is part of the EU project WreckProtect, a cooperative effort to assess which archaeological treasures are at risk. The project includes researchers from Sweden, Denmark and the Netherlands, as well as experts from France and Germany.

One of the objectives is to develop methods to protect the shipwrecks, for example by covering them with geotextile and bottom sediment, and another is to try to predict to which areas the shipworm is likely to spread in the future. The researchers say there are some 100 000 well-preserved shipwrecks in the Baltic Sea.

'Around 100 wrecks are already infested in the Southern Baltic, but yet it hasn't even spread past Falsterbo. We know it can survive the salinity of the Stockholm archipelago, although it needs water with higher salinity than that to be able to reproduce,' says Appelqvist. 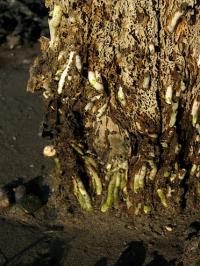 Infested Pier Pole in the Swedish Province of Bohuslän