The UK-led Beagle 2 Mars Lander, thought lost on Mars since 2003, has been found partially deployed on the surface of the planet, ending the mystery of what happened to the mission more than a decade ago.

Images taken by the HiRISE camera on NASA's Mars Reconnaissance Orbiter, or MRO, and initially searched by Michael Croon of Trier, Germany, a former member of the European Space Agency's Mars Express operations team at the European Space Operations Centre, have identified clear evidence for the lander and convincing evidence for key entry and descent components on the surface of Mars within the expected landing area of Isidis Planitia, an impact basin close to the equator.

This finding shows that the Entry, Descent and Landing, or EDL, sequence for Beagle 2 worked and the lander did successfully touchdown on Mars on Christmas Day 2003.

"We've been looking for all the past landers with HiRISE, this is the first time we found one that didn't send a signal after it landed," said Alfred McEwen, principal investigator of the HiRISE mission and professor in the UA's Lunar and Planetary Lab. "If the landing sequence works correctly, the probe sends a radio signal, and you can use that to pinpoint where it is coming from, even if it broadcasts only very briefly. But in the case of Beagle 2, we didn't get anything. All we had to go by was the target landing area."

Since the loss of Beagle 2 following its landing timed for Dec. 25, 2003, a search for it has been underway using images taken by the HiRISE camera on the MRO. HiRISE has been taking occasional pictures of the landing site in addition to pursuing its scientific studies of the surface of Mars. The planned landing area for Beagle 2 at the time of launch was approximately 170 x 100 kilometers (105 x 62 miles) within Isidis Planitia. With a fully deployed Beagle 2 being less than a few meters across and a camera image scale of about 0.3 m (10 inches), detection is a very difficult and a painstaking task. The initial detection came from HiRISE images taken on Feb. 28, 2013, and June 29, 2014 (Images ESP_037145_1915 and ESP_030908_1915). Croon had submitted a request through the HiWISH program, which allows anyone to submit suggestions for HiRISE imaging targets.

"He found something that would be a good candidate at the edge of the frame," McEwen said. "But contrast was low in the first image, and it was difficult to convince yourself something special was there."

The team acquired several more images, which showed a bright spot that seemed to move around.

"That was consistent with Beagle 2," McEwen said. "Because its solar panels were arranged in petals, each one would reflect light differently depending on the angles of the sun and MRO, especially if the lander was resting on sloping ground."

The imaging data may be consistent with only a partial deployment of Beagle 2 following landing, which would explain why no signal or data was received from the lander, as full deployment of all solar panels was needed to expose the RF antenna, which would transmit data and receive commands from Earth via orbiting Mars spacecraft.

The HiRISE images reveal only two or three of the motorized solar panels, but that may be due to their favorable tilts for sun glints. According to the UK Space Agency, if some panels failed to deploy, reasons could include obstruction from an airbag remaining in the proximity of the lander due to gas leakage, or a damaged mechanism or structure or broken electrical connection, perhaps due to unexpected shock loads during landing. The scenario of local terrain topology, including rocks blocking the deployment, is considered unlikely given images of the landing area, which show few rocks, but this cannot be ruled out. Further imaging and analysis is planned to narrow the options for what happened. Slope and height derived from the HiRISE images show that Beagle 2 landed on comparable flat terrain with no major hazards.

The discovery benefited from an additional image clean-up step that the HiRISE team has been testing, which removes very subtle electronic noise patterns that have to do with the way the instruments work on the MRO. Sarah Sutton, a HiRISE image processing scientist at LPL who was involved in processing the images that revealed the marooned lander, pointed out that this process is an additional step to make the images "just a little bit clearer."

"We have to be really careful not to modify the science data," said Sutton, who received her bachelor's degree in mathematics from the UA. "We do not make any enhancements or modify the images. All we do is eliminate subtle artifacts from high-frequency electronic noise. The untrained eye would not see it, but I see it.

"When we look at objects that are at the limit of the resolution of HiRISE, like Beagle 2, every bit of image clean-up helps."

Beagle 2 was part of the ESA Mars Express Mission launched in June 2003. Mars Express is still orbiting Mars and returning scientific data on the planet. Beagle 2 was successfully ejected from ESA's Mars Express spacecraft on the Dec. 19, 2003 -- 5.75 days away from Mars and Mars Express' engine firing and orbital injection.

Beagle 2 inspired many in the general public and led indirectly to the UK becoming a leading member of ESA's Aurora program and the UK-led ESA ExoMars mission. This rover will explore Mars in 2019, drilling up to 2 meters (6 feet) beneath the soil to explore the geochemistry and mineralogy of Mars and search for potential evidence of past life. 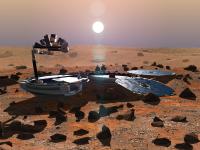 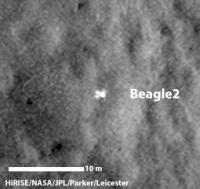