NASA's Terra satellite is one of many satellites keeping a close eye on Hurricane Jose and saw the storm between the Bahamas and Bermuda.

At 5 a.m. AST/EDT (0900 UTC), the center of Hurricane Jose was located near 26.1 degrees north latitude and 66.0 degrees west longitude. That's about 505 miles (810 Km) east-northeast of the southeastern Bahamas and 435 miles (700 km) south of Bermuda. Jose was moving toward the southeast near 8 mph (13 km/h), but it is expected to make a slow clockwise loop during the next 36 to 48 hours, moving west-northwestward by late Thursday, Sept. 14. Maximum sustained winds are near 75 mph (120 kph) with higher gusts. Little change in strength is forecast during the next 48 hours. The estimated minimum central pressure is 985 millibars.

The animation showed Hurricane Jose as it continued making a loop in the Atlantic Ocean between Bermuda and the Bahamas and Post-Tropical Cyclone Irma moved north and weakened to a remnant low pressure area centered over southeastern Missouri.

National Hurricane Center forecaster Jack Beven said that Jose continues to be affected by 20-25 knots of northerly vertical wind shear, and a recent overpass from the GMI instrument aboard NASA/JAXA's Global Precipitation Measurement mission core satellite shows that the low-level center is at the northern edge of the large area of thunderstorms.

NASA sees Hurricane Jose in between Bahamas and Bermuda 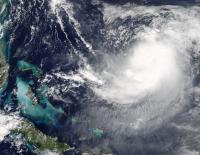