Washington, D.C.—There are places in space where the gravitational tug between a planet and the Sun balance out, allowing other smaller bodies to remain stable. These places are called Lagrangian points. So-called Trojan asteroids have been found in some of these stable spots near Jupiter and Neptune. Trojans share their planet's orbit and help astronomers understand how the planets formed and how the solar system evolved. Now Scott Sheppard at the Carnegie Institution's Department of Terrestrial Magnetism and Chad Trujillo* have discovered the first Trojan asteroid, 2008 LC18, in a difficult-to-detect stability region at Neptune, called the Lagrangian L5 point. They used the discovery to estimate the asteroid population there and find that it is similar to the asteroid population at Neptune's L4 point. The research is published in the August 12, 2010, online issue of Science Express.

Sheppard explained: "The L4 and L5 Neptune Trojan stability regions lie about 60 degrees ahead of and behind the planet, respectively. Unlike the other three Lagrangian points, these two areas are particularly stable, so dust and other objects tend to collect there. We found 3 of the 6 known Neptune Trojans in the L4 region in the last several years, but L5 is very difficult to observe because the line-of-sight of the region is near the bright center of our galaxy."

The scientists devised a unique observing strategy. Using images from the digitized all-sky survey they identified places in the stability regions where dust clouds in our galaxy blocked out the background starlight from the galaxy's plane, providing an observational window to the foreground asteroids. They discovered the L5 Neptune Trojan using the 8.2-meter Japanese Subaru telescope in Hawaii and determined its orbit with Carnegie's 6.5-meter Magellan telescopes at Las Campanas, Chile.

"We estimate that the new Neptune Trojan has a diameter of about 100 kilometers and that there are about 150 Neptune Trojans of similar size at L5," Sheppard said. "It matches the population estimates for the L4 Neptune stability region. This makes the Neptune Trojans more numerous than those bodies in the main asteroid belt between Mars and Jupiter. There are fewer Neptune Trojans known simply because they are very faint since they are so far from the Earth and Sun."

The L5 Trojan has an orbit that is very tilted to the plane of the solar system, just like several in L4. This suggests they were captured into these stable regions during the very early solar system when Neptune was moving on a much different orbit than it is now. Capture was either through a slow, smooth planetary migration process or as the giant planets settled into their orbits, their gravitational attraction could have caught and "frozen" asteroids into these spots. The solar system was likely a much more chaotic place during that time with many bodies stirred up onto unusual orbits.

The region of space surveyed also included a volume through which the New Horizons spacecraft will pass after its encounter with Pluto in 2015.

The work was funded in part by the New Horizon's spacecraft mission to Pluto.

* Co-author Chadwick Trujillo is with the Gemini Observatory. The Carnegie Institution for Science (carnegieScience.edu) has been a pioneering force in basic scientific research since 1902. It is a private, nonprofit organization with six research departments throughout the U.S. Carnegie scientists are leaders in plant biology, developmental biology, astronomy, materials science, global ecology, and Earth and planetary science. 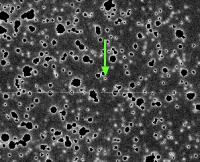