Dubbed as "ghost particles," neutrinos have no electric charge and their masses are so tiny that they are difficult to observe. The sun, nuclear reactors, supernovae explosions create them, when their nuclei are going through a radioactive decay, known as beta decay. The Center for Underground Physics, within the Institute for Basic Science (IBS) led the Neutrino Experiment for Oscillation at Short Baseline (NEOS) to study the most elusive neutrinos, the so-called 'sterile neutrinos'. Their results are now available in the journal Physical Review Letters.

Neutrinos detected up to now come in three types, or flavors: electron neutrino, muon neutrino, and tau neutrino. Neutrinos can change from one type to another, through a phenomenon called neutrino oscillation. Interestingly, previous experiments measured these oscillations and found an anomaly in the data: the number of measured neutrinos is around 7% lower than the predicted value. Researchers have proposed that these disappearing neutrinos, transform into a fourth type of neutrinos, that is the sterile neutrinos.

The experiment took place inside the Hanbit Nuclear Power Plant in Yeonggwang (South Korea), a standard nuclear reactor that is expected to produces 5.1020 neutrinos per second, as by-products of the reaction that generates nuclear energy.

Firstly, the scientists had to overcome the problem of background signals present in the atmosphere, that could hinder the neutrino detection. One solution was to install the detector underground, as close as possible to the core of the reactor, where the beta decay reaction is taking place. In this case, the neutrino detector was installed 24 meters from the core, in a structure called tendon gallery. The detector was protected by several layers of lead blocks, which shield the detector from gamma rays, and of borated polyethylene to block neutrons.

Scientists measured the number of electron neutrinos using a detector, which contains a called liquid scintillator, that produces a light signal when a neutrino interacts with it. They then compared their results with data obtained from other experiments and theoretical calculations. In some cases NEOS results agreed with the previous data, but in other cases they differed. For example, the data show that there is an unexplained abundance of neutrinos with energy of 5 MeV (Mega-electron Volts), dubbed "the 5 MeV bump", much higher than the one predicted from theoretical models. 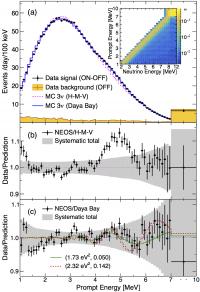 Results from the NEOS Experiment