TORONTO, ON - Natural selection has shaped the ways in which babies grow in different species, including the rate or speed with which they develop.

A new study by Canadian researchers suggests that some baby monkeys develop faster than others in the same population, and that this is best explained by the threat of infanticide they face.

The study, led by Iulia Bădescu, a PhD candidate in evolutionary anthropology at the University of Toronto (U of T), and Professor Pascale Sicotte of the Department of Anthropology and Archaeology at the University of Calgary (U of C), looked at infant development in wild ursine colobus monkeys. The study is published in the April 2016 issue of Animal Behaviour, and available online today.

"Infanticide occurs in many animals, including carnivores like lions and bears, rodents like mice, and in primates," said Bădescu. "Typically, an adult male kills an infant sired by another male so that he can mate with the mother and sire his own infants with her."

Black-and-white colobus includes several species of medium-sized monkeys found throughout equatorial Africa. They have black bodies with white hair that sometimes forms a bushy white beard and sideburns, or can extend down the back like a 'cape' and down the tail. They are distinguished from many other monkeys by their lack of an opposable thumb and their cow-like stomachs that allow them to digest the fibrous leaves they eat.

Colobus babies are born pure white and their coat color changes to grey after a few weeks before turning black-and-white between two and five months. The researchers were intrigued by the fact that infants varied in the age at which their coats became grey, and then black and white. They also realized that these colour transitions were helpful to track the development of the infants, in a non-intrusive fashion.

Earlier research at the study site, Boabeng-Fiema Monkey Sanctuary in Ghana, established that some scenarios are more likely to lead to infanticide by males. Groups with multiple males, for example, have more instances of infanticide.

The team observed nine groups of ursine colobus monkeys in the wild over a period of eight years (2007 to 2014). "We found that infants facing a greater risk of infanticide developed faster than infants facing lesser risk," explained Sicotte.

However, the researchers suggest that infants and their mothers have more avenues to avoid infanticide and ensure survival than previously believed.

They speculate that the mothers may invest more energy in their infants in a short time span, which might accelerate their growth. When a male enters the group and starts behaving aggressively towards infants, he might focus on the younger, more vulnerable infants rather than those close to being independent juveniles whose mothers are probably starting to ovulate soon anyway.

"The experience of observing an infanticide is horrific," noted Bădescu who has witnessed it.

"We know that infanticide is the result of an evolutionary arms race, where males compete with each other for reproduction and try to influence females in mating with them," added Sicotte. "In species where it happens more often, it can certainly influence the nature of the social relationships between males, as well as between males and females."

The U of T-U of C team also found that infant males developed faster than females.

"Infant males are at greater risk of infanticidal attacks because killing a male infant not only gives reproductive access to the mother, but also eliminates a future sexual rival for the infanticidal male and his future offspring," explained Bădescu.

The researchers also considered other possibilities to explain faster development, including access to food. They found, however, that variation in group size, which would lead to more competition for food in larger groups, did not influence infant development. Consideration of a combination of factors led the team to conclude that the threat of infanticide was the best explanation for the observed variation in infant development in ursine colobus monkeys.

It remains unclear how the mother perceives the threat of infanticide. She may be triggered by the males' presence, body language, hormones, solicitations to copulate, and so on. "These are all good questions for future research," said Bădescu. Also unknown is the exact mechanism by which mothers and infants speed up development in response to infanticide pressure.

The answer may be found in maternal milk. The physiology of mothers adjusts lactation and maternal milk to cater to the specific needs of their infants. With infanticide, it may be that stress hormones are being produced in greater quantities in the milk, triggering faster development.

Mothers may also be controlling their infants' development: they may start rejecting their infants more often in an attempt to wean faster, which could trigger faster development in the infants. Alternatively, infants may start feeling stressed if infanticide pressure rises and development may speed up in response to this stress. Bădescu and Sicotte think it is more likely a combination of both maternal and infant effects that lead to variation in infant development rates.

Other members of the research group included Eva Wikberg of U of C and the University of Tokyo, as well as Lisa MacDonald, Stephanie Fox, Josie Vayro and Angela Crotty, all of U of C.

Note to editors: The research paper "Infanticide pressure accelerates infant development in a wild primate" is available for viewing without restrictions until May 6, 2016 at http://www.sciencedirect.com/science/article/pii/S0003347216000610. 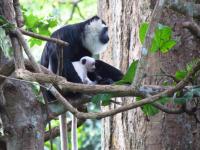