The word “crystal” typically conjures up images of gemstones like diamonds in our minds. Generally associating words like “hardness” and “rigidity” with crystals, we would most likely not consider them as flexible. However, certain “molecular crystals” can bend, twist, and even jump when excited with light or heat and have garnered attention from chemists, materials scientists, and engineers alike owing to their potential applications in actuators, artificial muscles, and soft robotics.

The secret to the remarkable mechanical properties of molecular crystals lies in “photoisomerization,” a process in which a molecule takes on a different structure by absorbing light. However, several drawbacks, such as slow mechanical response and limited choice of wavelength for inducing photoisomerization, limit the applicability of molecular crystals. Moreover, only very thin crystals (up to 20 microns) can show appreciable mechanical response.

Now, in a recent study published in the Journal of the American Chemical Society, scientists from Japan have taken things to the next level by making thick crystals bend rapidly with UV light using what is called the “photothermal effect,” a phenomenon in which heat is generated by exciting materials with light. Adjunct Researcher Hideko Koshima from Waseda University, Japan, who led the study, lays out their motivation: "Last year, our team accidentally discovered that the photothermal effect causes a crystal to bend fast, but we couldn't explain why. Against this backdrop, we sought to create a new, faster bending crystal and clarify the underlying mechanism."

Scientists first exposed a thin salicylideneaniline derivative crystal, a promising mechanical crystal candidate, to UV light and obtained substantial bending within approximately 1 second. However, the bend angle dropped rapidly with increasing crystal thickness, revealing that the bending was caused by photoisomerization. Things took an interesting turn when on illuminating a thick (>40 microns) crystal with UV light, they observed an extremely rapid bending within several milliseconds, a distinct signature of the photothermal effect. Furthermore, by using a pulsed UV laser light, they could make the crystals bend at a frequency of 500 Hz (cycles/second).

The scientists next determined heat conduction in the crystal using temperature wave analysis and suggested a potential bending mechanism in which a non-steady temperature gradient in the thickness direction generated the high-speed bending. By calculating the temperature gradient numerically, they simulated the bending motion to validate the proposed mechanism.

The team is thrilled about the implications of their findings. "As the photothermal effect occurs in almost all crystals that absorb light, any light may move any crystal at high speeds. Further, the bending motion can now be simulated, providing the basis for practical applications such as in light-driven actuators. What's more, these light-activated mechanical crystals can be used to create novel soft robotic structures that ensure safe human-robot interaction,” speculates Koshima, excited.

So, is a future where a friendly and safe robot companion such as Baymax from Big Hero 6 within our grasp? The findings by Koshima's team have certainly put us one step forward in that direction.

Dancing with the light: A new way to make crystals bend by shining light 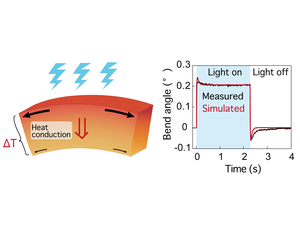