Galaxies eventually undergo a phase in which they lose most of their gas, which results in a change into their properties over the course of their evolution. Current models for galaxy evolution suggest this should eventually happen to all galaxies, including our own Milky Way; Al Yazeedi and her team are delving into this process.

Commenting on the findings, Al Yazeedi said: “The evolution of galaxies is directly linked to the activity of their central supermassive blackhole (SMBH). However, the connection between the activity of SMBHs and the ejection of gas from the entire galaxy is poorly understood. Observational studies, including our research, are essential to clarify how the central SMBH can influence the evolution of its entire host galaxy and prove key theoretical concepts in the field of astrophysics.”

Titled The impact of low luminosity AGN on their host galaxies: A radio and optical investigation of the kpc-scale outflow in MaNGA 1-166919, the paper has been published in Astronomical Journal. Its findings outline gas ejection mechanisms, outflow properties, and how they are related to the activity of the supermassive blackhole (SMBH) at the center of the host galaxy.

To that end, the paper presents a detailed optical and radio study of the MaNGA 1-166919 galaxy, which appears to have an Active Galactic Nucleus (AGN). Radio morphology shows two lobes (jets) emanating from the center of the galaxy, a clear sign of AGN activity that could be driving the optical outflow. By measuring the outflow properties, the NYUAD researchers documented how the extent of the optical outflow matches the extent of radio emission.

Al Yazeedi is a member of NYUAD’s Kawader program, a national capacity-building research fellowship that allows outstanding graduates to gain experience in cutting-edge academic research. The three-year, individually tailored, intensive program is designed for graduates considering a graduate degree or a career in research.

Her paper adds to the growing body of UAE space research and activities. The UAE has sent an Emirati into space, a spacecraft around Mars and recently announced plans to send a robotic rover to the Moon in 2022, ahead of the ultimate goal to build a city on Mars by 2117.

Emirati women are playing a key role in the research and development behind these projects. The Mars Hope probe science team, which is 80 percent female, was led by Sarah Al Amiri, Minister of State for Advanced Sciences and chairperson of the country’s space agency.

The impact of low luminosity AGN on their host galaxies: A radio and optical investigation of the kpc-scale outflow in MaNGA 1-166919 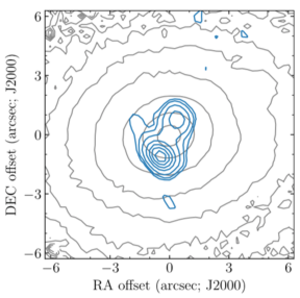 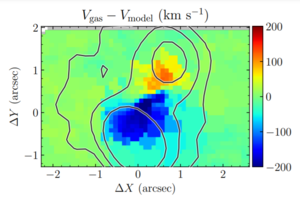