Removal of an offender’s hand, tongue or ear: punishments described in Babylon’s Hammurabi Code, depended on the nature of the crime. Published in 1771 B.C., the code set the first formal standards for business interactions. But scientists disagree about whether punishment is necessary to maintain mutually-beneficial interactions between animals and plants in nature. In a new study in Proceedings of the National Academy of Sciences, researchers at the Smithsonian Tropical Research Institute (STRI) in Panama and the Xishuangbanna Tropical Botanical Garden in China discovered the exception that clearly demonstrates that sanctions enforce cooperation in the fig-wasp mutualism.

The finely-tuned relationship between many different species of fig trees and their wasps took shape between 70 and 90 million years ago: a female wasp squeezes through a hole in the end of a fig losing her wings in the process. Once inside this sphere full of flowers, she places pollen and eggs on some of the flowers, and as she does, she may also deposit a drop of fluid that causes the developing flower to form gall tissue to feed wasp larvae. Wasps mate inside the fig, males chew exit holes and then females crawl out, carrying pollen as they fly off to repeat this drama in the next fig.

But what would happen if figs were not pollinated? No fig seeds would develop, and eventually, there would be no more figs trees. That would be a disaster for tropical forests where a huge number of animals, from birds, monkeys and bats in the treetops to wild pigs and even fish, depend on fig fruits to survive.

Botanists in China’s Yunnan province discovered a fig species, Ficus microcarpa, is visited by two different, related wasp species. The first, Eupristina verticillata, is an active pollinator, has combs on its legs to harvest pollen, and pollen pockets. The second, another Eupristina species that has not yet been named, lacks combs and pockets. It lays its eggs in fig fruits and its larvae eat gall tissue, but it doesn’t pollinate the fig.

“Once you have a mutualism established, because everybody benefits, you might not expect to lose it,” Herre said. “We know of relatively few cases where this has clearly happened.”

In previous studies of 16 fig species, fig trees appear to reward wasps that actually pollinate them and provide severe disincentives to wasps that do not. Trees drop figs containing large numbers of unpollinated flowers on the ground where they rot before the young wasps can develop and leave the fig. This punishment, or sanction, for non-pollinators should get rid of wasp species that don’t pollinate.

“If only the wasps that actually pollinate figs preferentially survive, the mutualism between figs and wasps is maintained,” said Charlotte Jander, who studied many different fig species in Panama. “In 16 studies of actively pollinated figs, Ficus microcarpa is the first that does not seem to eliminate non-pollinating wasps by aborting its own fruit.”

“This is the first case ever reported in which a fig species seems to be ambivalent in the face of a non-helpful wasp,” Herre said. “The ancestral pollinators in this case produced an ‘evil twin’ that stopped benefitting the fig by pollinating it. The fig-wasp mutualism is stable when you enforce good behavior. When you do not enforce good behavior, it seems that you may get burned.”

The researchers call the non-pollinator a cheater, or a parasite, because it eats seeds but does not pollinate, as opposed to the mutualists that eat in return for pollinating. Because, in this case, the cheaters are better at reproducing than the pollinators, one would expect that they would replace the pollinators altogether, and the mutualistic relationship between figs and wasps would fall apart.

“We found that not only is there is a cheater, but, in every way, it does better than the pollinator,” Herre said. “How can that happen?”

It turns out that the wind seems to play a role in maintaining the mutualism. Research conducted at STRI showed that pollinator wasps easily travel up to 30 kilometers or so. Researchers in China noticed a repeating seasonal pattern in the abundance of each species: During the non-monsoon season, non-pollinating wasps were more abundant, but during the monsoon seasons when the wind blows from the west, pollinators were more abundant.

“We are seeing a system that is not in equilibrium,” Herre said. “In this species of host and these two wasp species, different proportions of incoming wasps from the two species result in different outcomes. But the take home is that sanctions prevent cheating and make for better, more mutually beneficial relationships.”

The evolution of parasitism from mutualism in wasps pollinating the fig, Ficus microcarpa, in Yunnan Province, China

Punishment enforces cooperation in the fig-wasp mutualism: The exception proves the rule 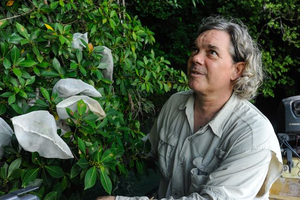