When we fixate an object, its image does not appear at the place where photoreceptors are packed most densely. Instead, its position is shifted slightly nasally and upwards from the cellular peak. This is shown in a recent study conducted at the University of Bonn (Germany), published in the journal Current Biology. The researchers observed such offsets in both eyes of 20 healthy subjects, and speculate that the underlying fixation behavior improves overall vision.

We like to think of the eye as a camera, but the analogy falls short if we look at the distribution of light sensitive cells – photoreceptors – in the human retina. In digital cameras, the sensor consists of many millions of photosensitive cells distributed evenly over the sensor surface. These pixels all have the same size and are uniformly packed. In the human retina, on the other hand, there are two types of pixels: rod and cone photoreceptors. While rods help seeing in dim light, cones enable us to see color and fine details. In contrast to their technical counterparts, cones vary greatly in size and spacing. In the fovea, a specialized central area conveying sharpest vision, there are up to 200,000 cones per square millimeter; this number drops to about 5,000 in the periphery. This is comparable to a camera with varying resolution across the field of view, resulting in sharp and less sharp areas in the final image.

Dr. Wolf Harmening, head of the adaptive optics and visual psychophysics group at the Department of Ophthalmology at the University Hospital Bonn explains: "In humans, cone packing varies within the fovea itself, with a sharp peak in its center. When we focus on an object, we align our eyes so that its image falls exactly on that spot – that, at least, was the general assumption so far."

Gaze is optimized to seeing with two eyes

As part of her doctoral thesis, Harmening's colleague, Jenny Lorén Reiniger found that this is not quite the case. Her research showed that fixated objects are somewhat shifted nasally and upwards in relation to the location of highest cone density – in a systematic way. "We studied 20 subjects, and found this trend in all of them," Reiniger says. "The offsets were a little larger for some and smaller for others; yet the direction was always the same, and symmetrically so between the two eyes. We also found that same spot when we repeated the measurement a year later."

At first glance, this seems paradoxical: Why do we not use the sharpest part of our retina for seeing? Perhaps this ‘trick’ allows us to reserve our eyes’ maximum resolution for areas of the image that need it most. "When we look at horizontal surfaces, such as the floor, objects above fixation are farther away," Reiniger explains. "This is true for most parts of our natural surrounds. Objects located higher appear a little smaller. Shifting our gaze in that fashion might enlarge the area of the visual field that is sheen sharply." The researchers speculate that this behavior is an adaptation to seeing with two eyes.

The observed image shift is quite small. "The fact that we were able to detect it at all is based on technical and methodological advances of the last two decades", says Harmening. The researchers from Bonn use a laser-based adaptive optics ophthalmoscope, enabling them to directly see individual cones in the eyes of their participants. "The method also shows us exactly which cells were used to fixate an object", says Harmening, who is also a member of the transdisciplinary research area "Life and Health" at the University of Bonn, and part of the Medical Imaging Center Bonn.

In the human retina, there are up to seven million of these tiny color receptors, but when we focus on a point we use only a small fraction of them - probably only a few dozen - and possibly always the same ones throughout our lives. Cell targeted vision testing will likely help to understand which ones are the most important, in health and disease.

Harmening: Human gaze is systematically offset from the center of cone topography

Seeing better by looking away

Journal
Current Biology
Funder
The study was supported by the Carl Zeiss Foundation and the Emmy Noether Program of the German Research Foundation (DFG). 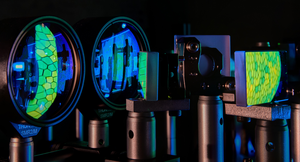