“We’ve shown in many other systems that there are signals that are so small that they’re hidden by the classical noise, but you can see them with the quantum noise,” ORNL’s Raphael Pooser said.

OU researchers are building the machine that produces entangled particles. The team will evaluate the system at ORNL and then perform a 5,000-foot deep well test at LSU. – Alexandra DeMarco

Caption: ORNL’s particle entanglement machine is a precursor to the device that University of Oklahoma researchers are building, which will produce entangled quantum particles for quantum sensing to detect underground pipeline leaks. Credit: ORNL, U.S. Dept. of Energy

Manufacturing – To infinity and beyond

A research team at Oak Ridge National Laboratory have 3D printed a thermal protection shield, or TPS, for a capsule that will launch with the Cygnus cargo spacecraft as part of the supply mission to the International Space Station. The launch will mark the first time an additively manufactured TPS has been sent to space.

Scientists worked with NASA to develop materials designed to withstand extreme temperatures encountered when objects reenter the atmosphere. The TPS protects a basketball-sized capsule that was developed by the University of Kentucky as a testbed for entry system technologies.

Equipped with sensors that record and transmit data to monitor performance, the capsule is anticipated to return to earth before the end of 2021.

Caption: A 3D printed thermal protection shield, produced by ORNL researchers for NASA, is part of a cargo spacecraft bound for the International Space Station. The shield was printed at the Department of Energy’s Manufacturing Demonstration Facility at ORNL. Credit: ORNL, U.S. Dept. of Energy

Oak Ridge National Laboratory researchers have developed a new catalyst for converting ethanol into C3+ olefins – the chemical building blocks for renewable jet fuel and diesel – that pushes the amount  produced to a record-high 88%, a more than 10% gain over their previously developed catalyst.

Increasing the yield from this conversion can advance cost-effective production of renewable transportation fuels.

In the search for new catalysts, ORNL’s Zhenglong Li achieved the record yield by exploring a new reaction pathway using a metal mix of copper, zinc and yttrium. His experiments add to fundamental understanding of how various metals behave in complex chemical reactions while also indicating potential for developing new catalysts and reducing carbon deposits that decrease yield in the catalysis process.

Caption: An ORNL research team is investigating new catalysts for ethanol conversion that could advance the cost-effective production of renewable transportation. Credit: Unsplash

Plants impact the environmental cycling of nutrients, water and carbon dioxide, making them vital components of Earth system models. To improve an Arctic ecosystem model that included only a few shrubs and grasses, ORNL integrated data about lichens, moss and shrubs collected from Alaskan field sites.

The expanded model incorporated the growth patterns of the added plants, showing that tall shrubs will grow more under warming conditions than low-growing plants.

“The ways plants respond to climate change will affect what happens to the large quantities of carbon in the Arctic,” said ORNL’s Benjamin Sulman. “Our model should allow us to make more accurate predictions about what those whole ecosystems will do.” – Abby Bower

An Oak Ridge National Laboratory researcher has invented a version of an isotope-separating device that can withstand extreme environments, including radiation and chemical solvents.

ORNL’s Kevin Gaddis designed the automated high pressure ion chromatography, or HPIC, system to improve purification of actinium-225, an isotope used in cancer treatments, from thorium targets that have been irradiated in a particle accelerator.

Previously, technicians relied on gravity to perform separations in hot cells, since high radiation levels would destroy an HPIC’s electronic components. Gaddis used radiation-tolerant materials to build a HPIC that uses air pressure, not electricity, to control the flow of the sample and chemicals that separate Ac-225 from byproducts. In tests, the HPIC cut separations time by 75%.

That’s important because demand is high for Ac-225, which has a short half-life. “Hours matter,” Gaddis said. “If we can reduce the time for the separation, we can get more product out.”

Caption: Chemist Kevin Gaddis has adapted components of a high pressure ion chromatography system to withstand the extreme conditions of a hot cell. The pump-driven system could cut the time needed for isotope separations by 75%. Credit: Carlos Jones/ORNL, U.S. Dept. of Energy

“Because the aperture is so small, the field only extends in that pocket or just above that pocket,” said ORNL’s Scott Retterer. “You’re only getting signal from that extremely small area within the aperture and everything else is dark.”

Using ORNL-produced ZMWs, researchers from the Washington University in St. Louis, School of Medicine and the University of Wisconsin-Madison used the method to observe proteins that are implicated in human heart function. – Alexandra DeMarco 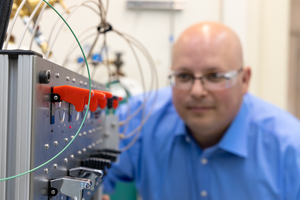 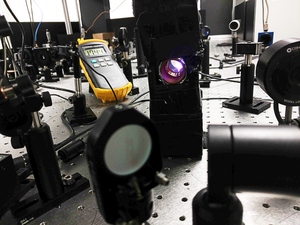