In 1842, Charles Darwin described the Belize Barrier Reef as “the most remarkable reef in the West Indies.” Fast forward to 2021, only about 17 percent of live coral cover remains on fore-reefs in Belize. Overfishing, resulting in reduced grazing of algae, has long been blamed for adversely impacting this globally significant ecosystem along the Caribbean coast of Central America. Designated in part as a UNESCO World Heritage Site in 1996, the Mesoamerican reef is second in length only to the iconic Great Barrier Reef in Australia.

A first-of-its-kind study provides evidence that reduced grazing is not solely responsible for coral death in this barrier reef and the proof is in the chemistry. Instead, nitrogen enrichment from land-based sources is significantly driving macroalgal blooms to increase on the Belize Barrier Reef and causing massive decline in hard coral cover. With only 2 percent of hard coral cover remaining in the Florida Keys National Marine Sanctuary, it’s too late to save that reef, but there is still hope for the Belize Barrier Reef.

Brian Lapointe, Ph.D., co-author and a senior research professor from Florida Atlantic University’s Harbor Branch Oceanographic Institute, and collaborators from the Wildlife Conservation Society, Belize Program, analyzed the carbon (C), nitrogen (N) and phosphorus (P) content and molar C:N:P ratios of baseline tissue from the 1980s and compared them with more recent samples collected in 2017 and 2019, with the recent data also being analyzed for stable isotopes of C and N.

Results of the study, published in the journal Marine Pollution Bulletin, suggest that N:P ratios have doubled over the past 35 years within the main Belize Barrier Reef lagoon, similar to the three-fold increases in N:P of macroalgae at Looe Key reef in the lower Florida Keys since the 1980s. The study provides an expansive geographic scope of potential nutrient impacts in the northern and central lagoon, while also using a unique, local historical baseline in the central lagoon to gauge the change in nutrient availability across the Belize Barrier Reef over the past four decades.

“Our study is the first to suggest that nutrient stress caused by nitrogen enrichment and elevated N:P ratios, both detrimental to hard coral physiology, is a primary mechanism by which human activities within watersheds and coastal environments of Belize are negatively impacting the barrier reef,” said Lapointe. “This is perhaps most acute for the health and biodiversity of hard corals that are the critical ecosystem engineers of tropical reefs. The impacts of deforestation, agriculture run-off, sewage, increasing numbers and capacity of cruise ships and tourism infrastructure, effluent from large-scale aquaculture production and large amounts of nutrient-rich ash from forest fires in the region are contributing to overall declining water quality and incidents of hyper-eutrophication in areas such as the Placencia Lagoon and the New River, Belize.”

Lapointe and co-authors Alexander Tewfik, Ph.D., a marine ecologist who served as senior conservation scientist from 2014 to 2019 for the Wildlife Conservation Society and is currently a consultant for the organization; and Myles Phillips, MSc., technical coordinator, Wildlife Conservation Society, examined the relationships between the C, N, P contents, stoichiometry (C:N:P) and stable isotopes of C and N found within the tissue of a variety of common macroalgae species sampled in the lower riverine, estuarine and shallow marine environments from around Belize City to the offshore fore-reef habitats of the Belize Barrier Reef.

They also compared their Belize City transect data from 2019, which included the Swallow Caye Wildlife Sanctuary declared to protect the endangered West Indian manatee and lying just 3 kilometers from Belize City, to similar elemental content (N, P) and stoichiometry data collected from macroalgae by the team in the South Water Caye Marine Reserve in 2017 and during the 1980s by Lapointe.

Researchers found that increasing nutrients, especially N, from the Belize River and Haulover Creek (a side channel and outfall of the Belize River), sustain macroalgal blooms from nearshore areas of the main lagoon to the offshore fore-reef. Significant offshore gradients of C:N:P in macroalgae all indicated land-based sources of these key nutrients; C:N and C:P ratios of macroalgae were lower in nearshore waters with lower salinity values, pointing to freshwater runoff as the source of nutrient enrichment; and N values of macroalgae were overall enriched well above values for N2 fixation, especially in near-shore waters, where values matched those reported for sewage pollution.

N:P ratios of macroalgae were elevated across the entire Belize City nearshore-to-offshore gradient to values of approximately 70:1, some four-fold higher than the Redfield Ratio (16:1) for oceanic waters and more than two-fold higher than values for macroalgae on the Belize Barrier Reef in the mid-1980s (about 30:1). This indicates widespread N-enrichment, increasing N:P ratios and a strengthening of P-limitation, which also is consistent with patterns of pelagic Sargassum across large areas of the Atlantic basin and Caribbean Sea, which have plagued the nearshore waters and beaches of the region with increased biomass since 2011.

“The mouth of Haulover Creek was clearly the most polluted site examined in our study, as it drains directly through the commercial center of the Belize City watershed that is heavily impacted by untreated sewage,” said Tewfik. “In addition, effluent from the processing of hundreds of metric tons of queen conch and Caribbean spiny lobster, the two most important fisheries exports in Belize, entering Haulover Creek is contributing to the negative effects of poor water quality in the lagoon.”

To mitigate the environmental impacts on the Belize Barrier Reef, the researchers say that a number of actions could be taken to reduce nutrient loading from urban effluents and agricultural run-off to improve water quality and restore the shallow coastal ecosystems of this globally significant coral reef ecosystem. They recommend to continue efforts in compiling ecological assessments of impacts, standardize appropriate management practices and water quality monitoring protocols, and adopt a focused ridge-to-reef conservation strategy as well as increasing awareness of often “invisible” nutrient contamination among the general public and political bodies.

“Eutrophication is an important and widespread problem that is recognized by coral reef scientists around the world,” said Lapointe. “Our latest data provide further evidence that it is unlikely that simply controlling fishing practices, even in light of climate change, will enhance resilience of Belize’s coral reefs or any other coral reefs being impacted by eutrophication. The reality of this large-scale coastal pollution must be rigorously confronted by scientists and resource managers alike in Belize, the United States and world-wide.”

This research was supported by NASA’s Biological Diversity and Ecological Forecasting Program under contract number 80NSSC19K0200 (Climate-influenced Nutrient Flows and Threats to the Biodiversity of the Belize Barrier Reef Reserve System), Coastal Association of Science and Technology (COAST) and FAU Harbor Branch. A number of additional staff of Wildlife Conservation Society, Belize aided with all field logistics, initial sample preparations and project support. 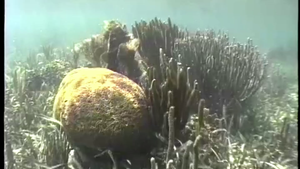 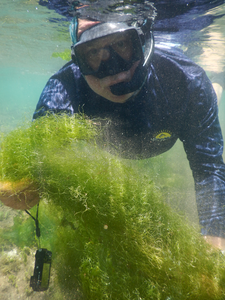 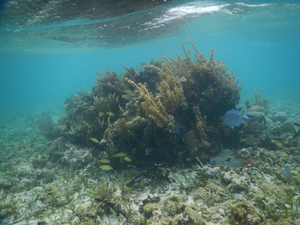