A potential predictor of complications during pregnancy and birth is fetal birth weight. For example, macrosomia (which is defined as a birth weight greater than 4,000 grams) makes it more difficult for the baby’s shoulders to pass through the mother’s vagina, and this effect can increase the mother’s risk of experiencing vaginal tearing and postpartum bleeding and her likelihood of needing to undergo a caesarian section. It also increases the baby’s likelihood of experiencing respiratory problems shortly after birth.

Given the serious problems that macrosomia can cause, obstetricians are keenly interested in techniques that allow them to predict a baby’s birth weight before the mother goes into labor. Thus, it should come as no surprise that dozens of research groups have proposed their own methods for predicting fetal weights since the 1980s. Many of these preexisting methods rely on two-dimensional analyses of ultrasound images of the developing fetus, but accurate evaluation of fetal weight by ultrasound is still challenging owing to fetal and maternal factors. As Prof. Qing-Qing Wu of Beijing’s Capital Medical University notes, “the accuracy of fetal weight predictions is of great significance to clinical work.” A research team at Capital Medical University led by Prof. Wu therefore decided to develop a model for predicting fetal weights based on three-dimensional analyses of ultrasound measurements of fetal limb volumes and abdominal circumferences, in a study published in Chinese Medical Journal.

For their study, the researchers analyzed ultrasound images of the fetuses of 202 pregnant Chinese women whose pregnancies were in the 28th to 42nd week of gestation. All ultrasound scans occurred at the Beijing Obstetrics and Gynecology Hospital between September 2017 and December 2018, and the women gave birth within 7 days of the ultrasound scans. A sonographer with over a decade of experience reviewed three-dimensional ultrasound scans to determine arm volume, thigh volume, and abdominal circumference values. The researchers then computationally generated a model with the arm volume, thigh volume, and abdominal circumference values and actual birthweights from 134 pregnancies and used these data to develop an algorithm for predicting birthweights. The researchers then tested the resulting algorithm to check whether it could accurately predict the actual birthweights for the remaining 68 pregnancies. Then, the algorithm’s birthweight-predicting ability was compared with those of traditional formulas, such as the Hadlock, Lee2009, and INTERGROWTH-21st formulas.

Analyses of the data showed that babies’ arm volume, thigh volume, and abdominal circumference values all positively correlated with actual birth weights. This means that babies with greater arm volume, thigh volume, and abdominal circumference values during late fetal development weighed more at birth. Further, an algorithm based on abdominal circumference values and arm volume-to-thigh volume ratios performed well at predicting birthweights. The newly developed algorithm’s performance compared favorably with the performance of the traditional formulas, and the novel algorithm outperformed the Lee2009 and INTERGROWTH-21st formulas at predicting macrosomia. Overall, 27 cases of macrosomia occurred, and the newly developed algorithm correctly predicted 87.5% of those cases while correctly predicting the absence of macrosomia for 91.7% of the negative cases.

In conclusion, these findings provide clear evidence that three-dimensional analyses of fetal limb volumes in ultrasound images can provide a basis for accurately predicting fetal weights and the risks of macrosomia. Prof. Wu predicts that the use of such three-dimensional analyses will lead to “fetal limb volumes becoming a parameter for predicting fetal weight” in future clinical practice and medical research. Although the researchers only tested their newly developed algorithm against fetuses in late stages of prenatal development, Prof. Wu predicts that, with further refinements, the algorithm could be used “to assess the growth of the fetus across all stages of prenatal development.” 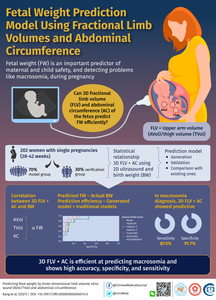 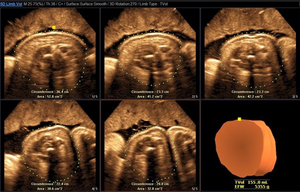