For more than 25 years, the Advanced Photon Source’s intense X-rays have enabled important breakthroughs. With a massive upgrade in the works, scientists will be able to see things at scale never seen before.

Every scientific breakthrough begins with an observation. About 125 years ago, our power to observe greatly expanded with the discovery of the invisible light known as X-rays. Many of us know them as a medical scanning technique, but the most powerful X-rays give us the ability to peer inside even the densest materials and see the atoms within.

“The APS speaks to one of the aspects of science that makes it so challenging but also so rewarding. You’re never entirely sure what you’re going to discover.” — Stephen Streiffer,  Argonne’s deputy laboratory director for science and technology and director of the APS

Argonne’s Advanced Photon Source (APS), a DOE Office of Science User Facility, produced its first X-ray light in 1995. Since then, the APS has enabled discoveries in nearly every scientific research discipline, including studies that won the 2009 and 2012 Nobel Prizes in chemistry.

The APS is a world-leading source of high-energy X-rays known as hard X-rays. These intensely bright rays are the key to imaging the properties of matter so that we can understand them, improve them and reinvent them. On any given day at the APS, an X-ray beam might be focused on the proteins that make up a pathogen such as coronavirus, crystals of lithium rocksalt for fast-charging batteries, the microbes present within soil or even a speck of irradiated nuclear fuel.

Already one of the most technologically complex machines in the world, the APS is in the midst of a revolutionary upgrade. Once the upgrade is complete, the facility will be able to generate X-rays up to 500 times brighter than what is possible today. That will enable scientists to observe an array of phenomena in much finer detail and often within time frames measured in billionths of seconds.

“If you want to understand materials at an atomic level — see how the atoms are arranged, how they move and how they change — the X-rays we produce here are key tools for making that happen,” said Jonathan Lang, director of Argonne’s X-ray Science Division.

The APS generates X-rays through a ring-shaped particle accelerator. Subatomic particles called electrons zip around the ring, steered by magnets. As the electrons wiggle through special magnetic arrays called undulators, they give off photons, which are particles of light. The photons are then funneled into one of many APS beamlines available to researchers, each used for a specific scientific purpose.

The work being done at the APS, which annually hosts approximately 5,500 academic, laboratory and industry researchers from around the world, serves a variety of scientific goals. It helps researchers understand the processes that underpin batteries and nuclear power, for example. Insights from the APS also inform the design of more efficient jet engines and techniques for making hydrogen from water, paving the way for clean hydrogen fuel for cars and electricity. All of these are helping the nation move toward a zero-carbon future to mitigate climate change.

Recently, the APS has been instrumental in research on SARS-CoV-2, the virus that causes COVID-19, by illuminating the structure of its proteins. Proteins from the virus have been used as the basis of vaccines that stimulate an immune response in the body. This is the latest in a string of biomedical breakthroughs aided by the APS, including a promising drug to treat Ebola and new avenues for fighting cancer with chemotherapy.

“The APS is great at contributing broad sets of knowledge to a lot of different disciplines,” said Lang. One example he pointed to is the development of smaller electronic devices that need less power to operate, an effort that builds on materials studies conducted at the APS. ​“All of the knowledge we’re gaining here on how to put things together and how to arrange the atoms contributes to the foundations of everything from advanced batteries to treatments for cancer.”

The APS, which is funded through the DOE’s Office of Science Basic Energy Sciences program, was state of the art when it came online in the 1990s. Such a facility needs to be built not just for the moment, but for the decades to come.

“The original design of the APS was done with enough forethought that it’s only now, almost 30 years into the future, that we are fully exploiting all of the capabilities of the current facility,” said Stephen Streiffer, Argonne’s deputy laboratory director for science and technology and director of the APS.

The planned upgrade will involve completely replacing the electron storage ring with a new, more powerful model. This will result in finer resolution for scientists such as Mary Upton, a physicist at Argonne who works with visiting scientists on experiments at the 27-ID beamline. Researchers at this beamline are often focused on magnetic materials that are the building blocks of computer memory.

“We’re entering an exciting time at the APS,” Upton said. ​“What was already an amazingly precise instrument at the 27-ID beamline will become even more powerful with the upgrade. The resulting insights will expand the capabilities of all our electronic devices.”

But this is just the start of the story. Other beamlines that offer users techniques based on X-ray imaging will see improvements that equal the improvement in the brightness of the X-rays, allowing them to scan volumes up to 500 times larger than currently possible.

The new X-ray source will enable faster and broader measurements. Take electrochemistry in a battery, for example. Electrons move quickly from one end to the other when batteries charge and discharge. But over days, weeks or years, other changes in the battery’s chemistry occur as it is used. The increased brightness will make it possible to see this bigger picture.

“The upgrade of the APS will enable science at scales we can’t even dream of right now,” said Dennis Mills, deputy associate lab director for photon science at Argonne. ​“The increased brightness, as well as the ability to focus those bright beams down to incredibly small sizes, will open new avenues of discovery that will lead to important innovations in a number of fields.”

The brighter beams also will vastly speed up research, making previously unfeasible experiments possible to conduct within minutes or hours. ​“If it takes you one hour to gather data, as opposed to a whole month, it just makes a world of difference,” Lang said. ​“That’s what the upgrade is going to allow us to do.”

The rate at which light sources have been improving over the past decades has outpaced the rate at which computers have gotten faster, noted Streiffer. That’s why the Argonne Leadership Computing Facility (ALCF), another DOE Office of Science User Facility, is a key asset.

“Light sources pose a huge data challenge,” Streiffer said. ​“Having our expertise and then the computational power of the ALCF is a key success factor in being able to use the upgraded APS and produce science.”

Right now, the APS collects approximately 5 petabytes of raw data per year — 1 petabyte is a million gigabytes. With the upgrade, that number will go up to hundreds of petabytes per year. The upcoming Aurora supercomputer, which arrives in 2022, will complement the surge in data.

“Aurora and other ALCF systems will be critical for processing and understanding data generated in the APS upgrade era,” said Nicholas Schwarz, principal computer scientist at Argonne.

The ALCF and the APS will be connected via a high-speed network to permit the exchange of massive datasets. This coupling of APS instruments and ALCF supercomputers will enable real-time analysis to help scientists make crucial experiment decisions, Schwarz said.

Already, scientists at Argonne have applied artificial intelligence to predict and reconstruct X-ray data faster than traditional methods. This type of work, along with the increased power available with Aurora, will help the ALCF keep up with the influx from the upgraded APS.

“Artificial intelligence will touch on all aspects of APS operation, from controlling the stability of the upgraded storage ring to automatically aligning samples in the X-ray beam,” Schwarz said.

If the last three decades are any indication, researchers will find ways to use the upgraded APS to accomplish breakthroughs we can’t even imagine today. In the APS’ early days, Streiffer noted, few thought the APS would be useful for determining the structure of a protein.

Conventional wisdom held that if you put a protein crystal into the beam, it would be vaporized before you could get any useful data. Instead, the APS has become a major home for this type of structural biology, thanks to painstaking experimental methods that allow biologists to measure a sample without destroying it.

“The APS speaks to one of the aspects of science that makes it so challenging, but also so rewarding,” Streiffer said. ​“You’re never entirely sure what you’re going to discover.”

The Argonne Leadership Computing Facility provides supercomputing capabilities to the scientific and engineering community to advance fundamental discovery and understanding in a broad range of disciplines. Supported by the U.S. Department of Energy’s (DOE’s) Office of Science, Advanced Scientific Computing Research (ASCR) program, the ALCF is one of two DOE Leadership Computing Facilities in the nation dedicated to open science. 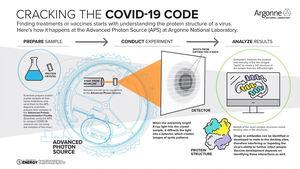 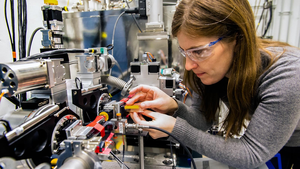