A single molecule contains a wealth of information. It includes not only the number of each kind of constituent atom, but also how they’re arranged and how they attach to each other. And during chemical reactions, that information determines the outcome and becomes transformed. Molecules collide, break apart, reassemble, and rebuild in predictable ways.

There’s another way of looking at a chemical reaction, says Santa Fe Institute External Professor Juan-Pérez Mercader, who is a physicist and astrobiologist based at Harvard University. It’s a kind of computation. A computing device is one that takes information as its input, then mechanically transforms that information and produces some output with a functional purpose. The input and output can be almost anything: Numbers, letters, objects, images, symbols, or something else.

Molecules may be small, but their potential as tools of computation is enormous. “This is a very powerful computing tool that needs to be harnessed,” he says, noting that a single mole of a substance has 10^23 elementary chemical processors capable of computation. For the last few years, Pérez-Mercader has been developing a new field he calls “native chemical computation.” It’s a multifaceted quest: He wants to not only exploit chemical computing but also find challenges for which it’s best-suited.

“If we have such a huge power, what kinds of problems can we tackle?” he asks. They’re not the same as those that might be better solved with a supercomputer, he says. “So what are they good for?”

He has some ideas. Chemical reactions, he says, are very good at building things. So in 2017, his group “programmed” chemical reactions to use a bunch of molecules to assemble a container. The experiment demonstrated that these molecules, in a sense, could recognize information — and transform it in a specific way, analogous to computation.

Pérez-Mercader and his chief collaborator on the project, chemical engineer Marta Dueñas-Díez at Harvard and the Repsol Technology Lab in Madrid, recently published a review of their progress on chemical computation. In it, they describe how chemical reactions can be used, in a lab, to build a wide range of familiar computing systems, from simple logic gates to Turing Machines. Their findings, says Pérez-Mercader, suggest that if chemical reactions can be “programmed” like other types of computing machines, they might be exploited for applications in many areas, including intelligent drug delivery, neural networks, or even artificial cells.

Read the review, “Native Chemical Computation. A Generic Application of Oscillating Chemistry Illustrated With the Belousov-Zhabotinsky Reaction," in Frontiers in Chemistry (May 11, 2021)

Native Chemical Computation. A Generic Application of Oscillating Chemistry Illustrated With the Belousov-Zhabotinsky Reaction. A Review 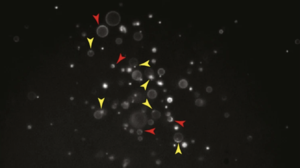