Chuah’s lecture, entitled “My Industry to Academia Research Journey and Energizing Innovations among Malaysian Engineers,” shared her research journey from industry to academia, which began in Malaysia and continued in the United States. She delivered the lecture virtually on July 31, 2021.

The annual lecture is named for Chin Fung Kee (1920–1990), a respected Malaysian civil engineer, researcher, and educator renowned internationally for innovation in geotechnical, structural, and hydraulic engineering. The series was established in 1991 by the Engineering Alumni Association of the University of Malaya and is organized jointly with the IEM. Over the years, the series has become an important  event for the Malaysian engineering community.

In her lecture, Chuah described the strong science and mathematical education she received in Malaysia. Her career in engineering began in earnest as a student at University of Malaya, and continued with Motorola Communication Sectors in Penang, Malaysia, where she worked with a talented team of research and development engineers.

Chuah’s experience and natural curiosity eventually led her to travel to the U.S. to pursue graduate studies. "I was fortunate to find several mentors that inspired me to pursue a career in research—first in industry and then in academia," she said. "The ‘main ingredients,’ though, have been curiosity, diligence, and perseverance."

During the lecture, Chuah also shared her thoughts on how industry, academic, and government collaboration in Malaysia could spur the development of the country’s engineering community—and the bright young minds aspiring to be leaders of the next generation.

Chuah serves as the associate chair of the Department of Computer Science and Engineering at Lehigh. She is a 2015 Fellow of the IEEE, as well as a 2017 Fellow of the U.S. National Academy of Inventors (NAI), and has served as chair for several top international conferences and as an editor for several top academic journals.

She graduated with honors from University of Malaya, and after her time with Motorola, she earned her MSc and PhD in electrical engineering from the University of California, San Diego. She then spent 12 years with AT&T Bell Laboratories and Lucent Bell Laboratories holding roles of increasing responsibility before joining the Rosin College faculty in 2004.

​Chuah's academic research has been funded by major funding agencies in the United States, such as the National Science Foundation (NSF), Defense Advanced Research Projects Agency (DARPA), and Department of Energy (DOE), as well as leading companies, including Qualcomm and Ford Motor Co. 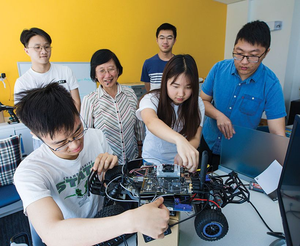