The finding, published in Australian Critical Care, showed elevated posttraumatic stress symptoms evident in 24 per cent of children during the 12 months after hospital discharge and most likely for children treated with midazolam therapy.

Midazolam is used to sedate children when they need lifesaving treatments like intubation, but the long-term side effects of using this drug have not been previously explored in children.

Associate Professor Debbie Long from the QUT Centre for Healthcare Transformation and a paediatric intensive care research lead at Queensland Children’s Hospital co-led the first longitudinal study, a collaboration between QUT, UQ and Children’s Health Queensland, which identified a link between midazolam and posttraumatic stress symptoms in children.

She said while this drug was already associated with posttraumatic stress in adults, this study was the first to find a link in children, and one of the first to include children as young as two years old.

Associate Professor Long said the study found children with elevated posttraumatic stress symptoms after intensive care were 3.63 times more likely to have been exposed to midazolam.

She said while drug protocols for children admitted to intensive care had changed in recent years as other drugs with neuroprotective benefits became available, midazolam was still widely used and the study served to raise awareness of its potential adverse effects and the need for early intervention.

Her team had demonstrated dexmedetomidine for long-term sedation up to 14 days as an alternative to midazolam that did not have its amnesic effects, but it would not completely replace its use.

“One of the benefits of dexmedetomidine is that we can reach the desired levels of sedation quickly and safely and have more awake sedation, allowing children to be calm and comfortable,” Associate Professor Long said.

“But there are some illnesses and injuries, such as seizures, for which midazolam is still considered the first line therapy so it is unlikely that the drug will be completely removed from our treatment armoury.”

More than 10,000 children are admitted to paediatric intensive care units across Australia and New Zealand each year because of trauma or critical illness, with many requiring life support.

“It was thought that giving a child midazolam would help them forget being in intensive care. But unfortunately, we think it distorts their memory making process,” she said.

“It’s possible they construct nonfactual memories and that, combined with drug withdrawal-related delirium, could lead to posttraumatic stress in the acute recovery phase.

“We’re starting to wonder if early posttraumatic stress is a gateway disorder to anxiety and depression even if it resolves, because health conditions like these are doubling as more children survive intensive care.

“If symptoms are not identified and managed early, the ripple effect could be life-long—affecting relationships at home, school or when getting a job in later years.”

Associate Professor Long said results from the study showed symptoms were significant in the first month after care but could continue for 10-12 months before resolving, and that some children still had elevated symptoms at 12 months.

“Our concern is that families with children who experience posttraumatic stress won’t engage in ongoing care because they’re too traumatised,” she said.

With knowledge from the study, Associate Professor Long will soon co-lead an interventional study to look at psychosocial support for parents and children, and ways to normalise the hospital treatment process to reduce the incidence of posttraumatic stress.

Study identifies link between sedative and PTSS in children 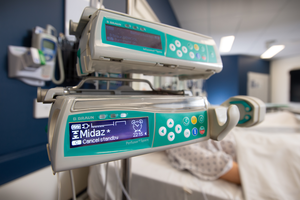