The fundamental process of cellular respiration – how cells make energy – has been brought to life in a new series of biomedical animations created by wehi.tv, in partnership with HHMI Biointeractive, an initiative of the Howard Hughes Medical Institute.

The animations reveal key molecular steps of cell respiration, generated with accurate scientific data and research. The animations were created by Emmy- and BAFTA-winning animator Dr Drew Berry, to educate and inform secondary school and university students, as well as to inspire an appreciation of biology in our community.

The respiration animations will launch as part of National Science Week and the SCINEMA International Science Film Festival 2021. Available under Creative Commons license, the animations provide free, high-quality resources for biology education in Australia and around the world.

Cellular respiration is a fundamental biological process that occurs through a series of enzyme reactions, during which the sugar molecule ‘glucose’ is broken down to release energy, which powers all cellular processes. Respiration occurs in every living cell, and it is taught in the secondary school science and university-level biology curricula, said Dr Berry, who leads the wehi.tv team.

“Respiration is a central process for every form of life on Earth, but can be a challenging concept for students to understand,” he said. “It involves dynamic molecular reactions and movement, which can be difficult to grasp from words or textbook diagrams.

“Through a collaboration with the HHMI Biointeractive, we have created a collection of animations that reveal the intracacies of cell respiration. Students can watch in action as glucose is gradually broken down by enzymes, releasing energy and carbon.”

“At every stage, we’ve been guided by what science has discovered. The enzymes involved in respiration have an inherent beauty and are mind-boggling to watch,” he said.

The development of the new animations received philanthropic support from the Telematics Trust, which enabled unique molecular sound design and original music to make the animations come to life, engaging students and the public alike.

“The grant from the Telematics Course Development Fund enabled me to collaborate with award-winning Australian film composer Franc Tétaz to create a musical score to evoke wonder and inspire students,” Dr Berry said. “We have all experienced the impact of sound in Hollywood movies, and they serve the same role in my animations. We learn and explore the world with multiple senses, and having sound makes the animations engrossing for an audience and helps create context for these molecular landscapes.”

“The funding also enabled us to involve Melbourne secondary school students in the animation, including wonderful narration provided by a female year 10 student, helping to make it relatable for Australian students and to encourage female students to consider careers in STEM,” he said.

Ms Ricci Swart AM, Chair of the Telematics Trust, said the new animations are an innovative educational resource for many people, both in Australia and around the world.

“We are thrilled to see the outcomes of this ground-breaking project. Dr Berry’s use of animation technology will solve the problem of explaining complex and critical biological processes,” she said.

“Being freely available online, including for educational purposes, means the animations are accessible to people across our community.”

The vision of Telematics Trust is for technology to transform lives through education and training for the cultural, social and economic benefit of Victorians.

The animations are available at wehi.tv and on WEHI’s YouTube Channel. They are provided freely (Creative Commons) for science education around the world. 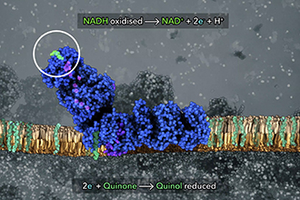 Movement of electrons along the electron transport chain 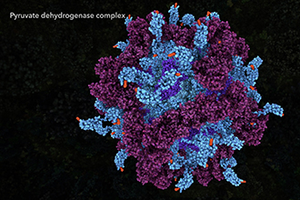