Lung cancer is the leading cause of cancer-related death. Current treatments employ immunotherapy, often in combination with chemotherapy, but benefits to patients remain slight. In a pre-clinical study, EPFL researchers investigated a method shown to enhance immunotherapy for other cancers. The study is published in Science Translational Medicine as the cover article.

“The type of immunotherapy approved for lung cancer treatment, called immune checkpoint blockade (ICB), is in a class of drug that can instigate CD8 T immune cells to attack the tumor,” says Amaia Martinez-Usatorre, lead author on the study and a postdoc in Professor Michele De Palma’s lab. “Unfortunately, only about a fifth of patients with lung cancer benefit from ICB, and long-lasting responses are rare.”

Scientists are trying to improve the efficacy of ICB in lung cancer, often by combining ICB with other drugs to directly enhance the CD8 T cells’ effect. But if there are not enough CD8 T cells in the tumor – often the case in lung cancer – this isn’t effective.

The team looked at lung cancer models with tumors genetically engineered to have mutations found in human lung cancer disease. “These tumors develop like the human lung cancer and are similarly difficult to treat with available anti-cancer drugs,” explains Martinez-Usatorre.

This novel approach has also been tested in patients and improved the treatment of certain other cancer types, such as liver cancer, for which it has recently become an approved therapy.

Unexpectedly, the researchers found that this drug combination did not work in the lung cancer models. “In fact, we found that some of the lung tumors even appeared to grow faster when we combined the anti-angiogenic drug with ICB,” explains Martinez-Usatorre. “This was an apparent paradox… and a setback.”

Further research revealed the probable culprit: along with the CD8 T cells, the anti-angiogenic drug was fostering the recruitment of another type of T cell, called regulatory T cells, or Tregs. In healthy organs, these two types of T cells work in concert, with CD8 T cells helping to clear infected cells and Tregs safeguarding tissue to prevent damage that could occur in the long term.

“This was bad news, because Tregs are known to be immunosuppressive, meaning that they can thwart the immune response by CD8 T cells against cancer,” says Ece Kadioglu, a PhD student in the De Palma lab and study co-author. “The ICB could not distinguish between ‘good’ CD8 T cells and ‘bad’ Tregs. It was empowering both. More Tregs mean more immunosuppressive effect, facilitating tumor growth.”

To counter this, the researchers then set to identify vulnerabilities in the Tregs. They found that their survival in tumors depended on another type of immune cell, called macrophages. Macrophages pose a problem because they not only help the Tregs to thrive, but also support the growth of cancer in many ways.

“When we analyzed human lung cancer datasets, we found that the more macrophages, the more Tregs there were in the lung tumors,” says Martinez-Usatorre. “This confirmed that we were likely onto something, that what we saw in the experimental tumor models was relevant to human disease. Macrophages and Tregs establish a dangerous liaison in lung cancer. To enhance the efficacy of ICB, we’d need to break up this liaison.”

The team discovered that two different types of macrophages were present in lung tumors – both contributing to support Tregs. To identify molecules to target them pharmacologically, they “profiled” them.

One type of tumor-associated macrophage expressed the protein CSF1R and needed it to survive, so they were able to eliminate it from the tumors by using an antibody to block CSF1R. But this didn’t work on the second type, because it did not express CSF1R and was not dependent on it. However, they discovered it was sensitive to a form of chemotherapy, called cisplatin, which is commonly given to patients with lung cancer.

This two-front attack combining cisplatin and the CSF1R antibody eliminated both macrophage types and left very few macrophages in the tumors. In turn, the Tregs were also eliminated, because now they lacked the vital macrophage support.

When the macrophages and Tregs were eliminated, only the ‘good’ CD8 T cells remained present in the tumors. With the increased number of CD8 T cells unhindered by Tregs, the ICB action was unleashed against the tumors, providing remarkable benefits.

“We were actually able to induce the regression of about 70% of the tumors,” says Martinez-Usatorre. “For comparison, only 15-20% of human lung cancer tumors currently respond to ICB. So it would be dramatic if this strategy could be translated to patients.”

“This combination is promising and could be tested in patients with lung cancer,” says Professor Michele De Palma. “That’s a real achievement for this study. We are currently in discussions to bring it forward to clinical trials. And because the drugs we used in this experiment – cisplatin and the CSF1R antibody – are approved treatments for certain human diseases, this could expedite clinical testing of the strategy.” 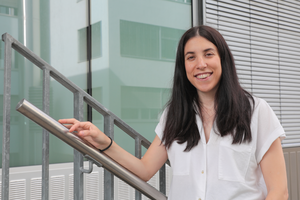