Darwin’s finches on the Galápagos Islands are once again providing insights into the theory of evolution, with two Flinders University studies investigating their dealings with a parasitic fly.

The avian vampire fly (Philornis downsi) was accidentally introduced to one island in the Galápagos back in the1960s, with its blood sucking larvae now spread across the islands and killing the offspring of most of the land birds.

The fly larvae feed on the blood and tissue of nestling birds, including feeding inside the birds’ nostrils.

Now, two new studies have explored how the various species of finches across the islands, whose discovery by Charles Darwin was pivotal to his research into natural selection and evolution, have been dealing with the fly, potentially providing further insight into the evolutionary pathways of introduced parasites.

In one study, published in the Nature journal Scientific Reports and led by Lauren Common, PhD Candidate in the Flinders University BirdLab, the researchers investigated which species of finch proved to be the most successful hosts for the flies.

The team found the fly’s larvae were most abundant and had the best survival rates inside the nests of the critically endangered medium tree finch, which lives only on Floreana Island, but had less success in the nests of hybrid tree finches.

“This tells us a story from both sides; on one hand, it demonstrates that natural selection would favour those flies that target this threatened species, but it also shows us how the finches are fighting back,” says Miss Common.

Since the arrival of the avian vampire fly, medium tree finches have started interbreeding with small tree finches to form a hybrid population.

“We found that nests belonging to these hybrid finches played host to fewer flies and had the lowest parasite survival rate, suggesting that hybridisation between the small and medium tree finches may be their defence strategy against this invasive parasite,” says Miss Common.

In the second project, led by Dr Andrew Katsis from the Flinders University BirdLab, the team looked at how the birds cope with being infected by the parasites.

The study, published in the journal Biological Journal of the Linnean Society, measured each nestling’s ‘behavioural type’ by recording how much it struggled during human handling and then compared this with how much damage the baby birds sustained from the flies.

“We found that nestlings that struggled more during handling also tended to have more deformed nostrils due to vampire fly parasitism,” says Dr Katsis.

“While we don’t yet know why this is the case, one possibility is that more vigorous nestlings are unwittingly attracting parasitic larvae to them by moving around inside the nest.

“Over time, we may expect to see more docile nestlings surviving to adulthood at greater rates, which could potentially change the behavioural traits of Darwin’s finches at a population level.”

Since 2012, researchers from the Flinders University BirdLab have been working with the Philornis downsi Action Group and the Galapagos Land Bird team to safeguard Darwin’s finches from extinction.

“Through life-threatening circumstance, Darwin’s finches again offer insights into natural selection and how species evolve when a parasite is introduced into an island system,” says Professor Sonia Kleindorfer, Head of the Flinders University BirdLab.

“Understanding how the finches are evolving to deal with the parasite will not only help us to help the finch population but may also provide strategies for dealing with other parasitic species around the world in the future.” 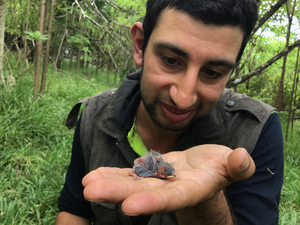 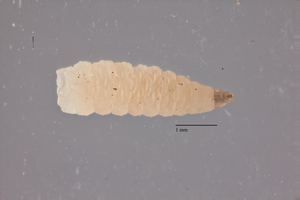 Larva of the avian vampire fly