Researchers at the Daegu Gyeongbuk Institute of Science and Technology (DGIST) in Korea have developed a new electrical brain stimulation technique that could improve the recovery of patients from strokes. Described in Scientific Reports, the technique uses less energy and has fewer side effects than existing methods.

A stroke is a major brain injury that can impair body functions, such as movement, balance and swallowing, and in order to recover, brain cells need to regenerate and re-establish neural connections. There have been various attempts to enhance this recovery process using physical exercise or direct electrical stimulation to the brain.

Electrical stimulation, however, can have undesirable side effects, such as speech and motor problems, caused by exciting unwanted neurons around the target area. In addition, electrical stimulation devices typically consume a lot of power, meaning they are expensive to run and require high-capacity batteries. To develop fully implantable and portable devices, these challenges must be addressed.

In response, the DGIST researchers developed a method called subthreshold electrical stimulation, through which a low-power electrical signal can be applied to neurons at a synapse – a junction between two neurons where electric nerve impulses are transmitted.

“By reducing the power, we can minimise the impact on non-target neurons, providing a more natural and less harmful way to encourage brain recovery after a stroke,” explains Kyungsoo Kim, one of the lead authors of the DGIST study.

The researchers first explored their idea using a computer simulation, before testing the technique on rats. The physical experiment involved the subthreshold electrical stimulation of post-synaptic neurons in the rats’ brains. At the same time, the rats were running on a wheel which naturally stimulated the pre-synaptic neurons. This process was performed twice a day for 16 days. At the end of the treatment, they monitored the rats’ behaviour and tested for the presence of proteins that signify neuronal recovery.

The results showed that neither exercise nor subthreshold electrical stimulation alone were able to initiate a nerve impulse at the synapse. However, when they occurred simultaneously, the neurons reached the threshold required to fire a signal. The researchers found that the stimulated brain regions contained higher levels of specific neural proteins, indicating that neural reconstruction had taken place. They also saw improvements in the rats’ behaviour. Taken together, these results imply that subthreshold electrical stimulation, when combined with motor training early in rehabilitation, may strengthen connections between brain regions and aid motor recovery.

“Our approach successfully increased the survival of neural connections after a stroke, while also reducing power consumption and avoiding side effects,” says Seung‑Jun Yoo, another lead author of the study from DGIST.

The next step will be to test whether the technique works for stroke-induced brain damage of different severities. In the future, deep brain stimulation and other electrical treatments may be able to overcome the limitations of existing medicines to treat a wide range of different brain diseases. 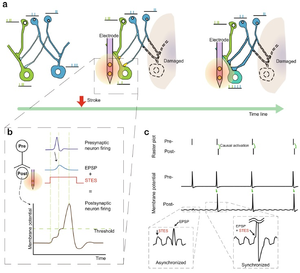