Decreasing the amount of a protein called TIGAR in cervical cancer cells was found to make those cancer cells more responsive to commonly-used chemotherapy drugs at a very low dose. Yet normal cells were not similarly affected, according to a study recently published in the Journal of Antivirals & Antiretrovirals.

As a result, developing a drug to target the TIGAR protein could be an effective way to lower chemotherapy doses for cervical cancer patients, bringing fewer side-effects while still killing cancer cells. Chemotherapy drugs can have severe side effects, including liver and kidney toxicities, because these drugs may harm normal cells as well as cancer cells.

“Our study has demonstrated that inhibiting TIGAR functions in HPV-infected cervical cancer cells not only sensitizes these cells to anti-cancer chemotherapeutic agents, but does so at extremely low, or sub-inhibitory, doses of these drugs,” said Robert Harrod, an Associate Professor in SMU’s Department of Biological Sciences and the senior author of the study.

Regulating TIGAR functions may also prove beneficial for other types of cancer. TIGAR is known to be highly expressed in many types of cancer that tend to have poor clinical outcomes, including leukemia, colon cancer and lung cancer. The protein’s role in HPV-induced cervical cancers was not fully understood, however, until this recent study.

Harrod’s research laboratory was awarded a three-year grant from the National Cancer Institute to identify molecular targets like TIGAR that play pivotal roles in the development and/or progression of human cancers. Determining the mechanics of how cancer cells evade therapies enables scientists to find chemical keys that can block that target’s function and prevent the negative biological effects that cause disease – the fundamental basis of new anti-cancer treatments.

The first author of the study was Lacin Yapindi, a Ph.D. graduate student in Molecular and Cellular Biology at SMU (Southern Methodist University) who works in Harrod’s lab. She was also the recipient of a 2021-2022 Moody Ph.D. Dissertation Fellowship.

TIGAR, an acronym for TP53-Induced Glycolysis and Apoptosis Regulator, is a stress-inducible antioxidant protein that all of the cells in our body have. Its primary function is to eliminate the toxic effects of what are known as reactive oxygen species (ROS), various types of unstable molecules that contain oxygen and easily react with other molecules within a cell. These unstable molecules play an important role in normal cellular processes, but their overproduction in rapidly dividing cells can cause damage to DNA, RNA and proteins.

Because cancer cells grow at a faster pace than normal non-cancerous cells, they tend to produce more toxic ROS by-products.

“To overcome this problem, cancer cells elevate the levels of the TIGAR protein, so they can continue to proliferate and grow much faster than normal cells but are not negatively affected by the damaging ROS,” Yapindi said. “In other words, TIGAR acts as a protective element for cancer cells.”

“In this study, we found that depleting TIGAR took that protective element away and resulted in high levels of cellular toxicity in cancer cells formed by human papillomaviruses or HPVs. This toxicity was further increased by the chemotherapy drugs we tested and led to cell death,” Yapindi explained.

These findings demonstrate that HPV-induced cervical cancer cells are highly dependent upon the antioxidant functions of TIGAR, Harrod said. The SMU researchers further showed that non-cancerous cells do not  contain elevated levels of TIGAR and were not as dependent on this factor as cancer cells.

Inside Harrod’s virology lab at SMU

These SMU researchers conducted several in vitro experiments to prove and validate their findings.

First, the team demonstrated that TIGAR protein levels were elevated in primary high-risk HPV16+ cervical cancer cells as compared to non-cancerous cells. They did this using a specific antibody that is known to recognize the TIGAR protein and also used another antibody tagged with a fluorescent dye that could be visualized using a laser confocal fluorescence-microscope. The study co-author, Dr. Brenda Y. Hernandez from the University of Hawaii Cancer Center, provided the primary HPV16+ clinical biopsy samples that were used to analyze TIGAR levels in these cancers.

The SMU researchers next examined what would happen if they decreased TIGAR protein levels in in vitro cultured HPV+ cervical cancer cells by exposing these cells to what’s known as small interfering RNA (siRNA) in a cell culture dish. siRNA molecules block with the expression of specific target genes by degrading their mRNAs soon after transcription. The siRNA used by SMU researchers was generated specifically to target the mRNA-expressing TIGAR, which allowed them to significantly decrease levels of the TIGAR protein in HPV+ cervical cancer cells.

The researchers then measured how effective different types of commonly used chemotherapy drugs were at killing cells: normal cells versus cancer cells that had TIGAR inhibited with the siRNA. Four different chemotherapy drugs, such as cisplatin and doxorubicin, were tested on these cells at low doses.

“When cells go through apoptosis, which is a controlled cell death event, a component of the cellular membrane called phosphatidylserine flips from the inner side of the membrane to the outer side to mark the cell as apoptotic,” Yapindi said.

As a cell dies and the cellular membrane that makes up the boundary of that cell disintegrates, the DNA that was inside that cell also becomes exposed.

So the researchers used fluorescent dyes, including Annexin V-fluorescein isothiocyanate and propidium iodide, to be able to see phosphatidylserine and exposed DNA, allowing them to confirm that cell death had occurred.

They discovered that inhibiting TIGAR expression resulted in significantly enhanced cancer cell death for all of the chemotherapy drugs they studied.

Normal human cells were not affected by the drug at these low concentrations with or without the siRNA to inhibit TIGAR, which underscores the dependence of cancer cells on the pro-survival functions of the TIGAR protein.

Harrod’s lab is working to develop a therapeutic inhibitor of TIGAR that could eventually be translated for clinical use, as there is currently no treatment yet available to target TIGAR’s antioxidant functions in human cancers

SMU is the nationally ranked global research university in the dynamic city of Dallas. SMU’s alumni, faculty and nearly 12,000 students in eight degree-granting schools demonstrate an entrepreneurial spirit as they lead change in their professions, communities and the world. 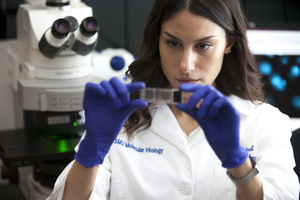