Contrary to the popular song, the neck bone is actually connected to one of 22 separate head bones that make up the human skull. These plate-like bones intersect at specialized joints called sutures, which normally allow the skull to expand as the brain grows but are absent in children with a birth defect called craniosynostosis. A new study in Nature Communications presents a detailed cellular atlas of the developing coronal suture, the one most commonly fused as a consequence of single gene mutations. The study brought together scientists from the laboratories of Gage Crump, Robert Maxson, and Amy Merrill at USC, and the laboratories of Andrew Wilkie and Stephen Twigg at the University of Oxford.

“Named for its location at the crown of the head, the coronal suture is affected in a number of birth defects,” said lead author D’Juan Farmer, a postdoctoral fellow in the Crump Lab. “These infants and children have to undergo a series of invasive and dangerous surgeries to expand their skulls, and we wanted to understand why the coronal suture is particularly sensitive to gene disruptions. So with an aim toward advancing new interventions for patients, we created the first detailed cell-by-cell description of how this suture develops.”

To achieve this, Farmer and his collaborators isolated cells from the developing coronal sutures of mice. The team then used sophisticated new DNA sequencing techniques to catalog the activities of all the protein-coding genes in thousands of individual cells.

Based on unique fingerprints of gene activity, they were able to identify 14 distinct types of cells in and around the developing suture. In so doing, they also identified new genes that may be involved in generating and maintaining the stem cells that grow the skull bones on either side of the suture.

In the tissue connecting the skull bones to the underlying brain, the scientists identified many interesting cell types that may communicate to the suture stem cells to regulate their activity.  The scientists also found overlying ligament-like cells that connect the skull plates and persist into adulthood. When stretched by the growing brain, these ligament-like cells could potentially serve as an indicator to nearby bone precursors that it’s time to enlarge the skull.

The scientists also looked at a mouse model for a particular form of craniosynostosis, Saethre-Chotzen Syndrome, to understand how the different cell types may be affected. In healthy mice, the suture stem cells were distributed asymmetrically. This likely contributes to a unique feature of the coronal suture: an overlap of the skull plates. In contrast, mice with craniosynostosis had far fewer suture stem cells, arranged in a more symmetrical distribution. This may cause the edges of the skull plates to grow directly into each other and contribute to suture fusions.

“By examining the very earliest stages of coronal suture development at cellular resolution, our study provides key insights into why this suture is particularly vulnerable to defects in newborns with craniosynostosis,” said Farmer. “We hope that these findings can inform less invasive or even preventative treatments for infants and children with this devastating birth defect.”

Study of skull birth defect takes it from the top 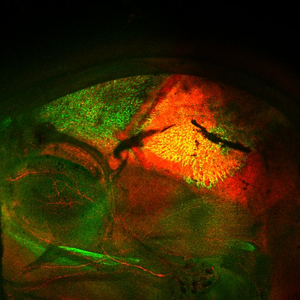