Most of the biomass waste in the world is cellulose. Wouldn’t it be awesome if we could effectively use cellulose for renewable energy to build a carbon-neutral, sustainable society? When trying to use the energy of biomass, it is common to convert it into useful forms such as hydrogen, alcohol, and monosaccharides as fuel through processes such as thermal decomposition, saccharification, and fermentation. However, inevitably these systems become complicated due to the increase in the number of processes and the extra energy consumption or the decrease in energy utilization efficiency of the entire process due to various reforming processes which is unavoidable. Therefore, a direct cellulose fuel cell capable of generating electricity by directly using cellulose as fuel without going through a reforming process is desired.

Cellulose is insoluble in most solvents but can be dissolved in strong alkaline aqueous solution. By making this reactant in a liquid phase or aqueous solution, a continuous fuel supply could be possible. There have been several reports of devices that use solid-phase or liquid-phase cellulose as fuel to generate electricity, but the detailed mechanism of the electrochemical oxidation reaction of cellulose remains unclear. This is because the oxidation of cellulose, which is a polymer, is kinetically complicated involving the transfer of multiple electrons, and there are very few electrochemical analysis examples. Therefore, in this study, a research group led by Assistant Professor Yosuke Kageshima of Shinshu University’s Department of Materials Chemistry, Faculty of Engineering ventured out to elucidate the mechanism of the reaction by kinetic analysis using hydrodynamic voltammetry.

Most previous research of direct cellulosic fuel cells so far has been evaluated using a two-electrode system that is close to the configuration of an actual fuel cell device, and information on the potential of the reaction or the potential dependence of the reaction path was scarce. In addition, there are examples of the development of electrode catalysts for cellulose oxidation made of various metals and alloys, but evaluation using porous electrodes has been the mainstream for these as well. Porous electrodes are advantageous for improving the output of a device because they can increase the specific surface area and the amount of catalyst supported, but the more essential information on the intrinsic catalytic activity of each material and the current density per area of the active site was unknown.

In other words, since the information about the reaction mechanism and the intrinsic catalytic activity of each metal type is unknown, there is no unified guideline for an attempt made to develop a catalyst with higher activity. The research group aimed to elucidate the potential dependence of the reaction mechanism by hydrodynamic voltammetry using a rotating disk electrode (RDE) in a three-electrode electrochemical cell.

From the results of detailed analysis based on the Koutecky–Levich equation and product analysis by HPLC, the cleavage reaction of the polymer chain or hydrolysis at the binding site of the glucose unit was observed at the relatively negative potential, which is mainly controlled by the charge transfer process. On the other hand, it was found that the decomposition into small molecules such as oxalic acid and formic acid proceeds at positive potential, which is dominated by both charge transfer and reactant diffusion processes.

To evaluate the intrinsic activity of various metal electrode catalysts against the cellulose oxidation reaction, platinum, gold, palladium, and nickel disk electrodes with a defined area were used for the electrochemical measurements in aqueous cellulose solutions. It was found that gold is highly active in the cleavage reaction of macromolecules at a negative potential, and nickel and palladium are highly active in the decomposition reaction into small molecules at a positive potential. It was suggested that the dominant electrocatalytic reaction pathway differs depending on the metal types. This research for the first time has made it possible to quantitatively discuss the electrochemical mechanism of the complex electrochemical reaction of cellulose oxidation.

Although experimental data from RDEs are generally analyzed based on the Koutecky–Levich equation, its application to the oxidative decomposition of macromolecules which is thought to involve an extremely large number of reaction electrons and many elementary processes has no precedence, so it was difficult to devise a quantitative discussion. By conducting control experiments using various aqueous cellulose solutions under different conditions and separating the charge transfer-limited process and reactant diffusion-limited process from the Koutecky–Levich equation, the group witnessed that the number of reaction electrons changes depending on the electrode potential and that the rate-determining step is switched between charge transfer and reactant diffusion.

The group was thrilled to be able to quantitatively discuss the decomposition reaction of macromolecular cellulose in this case, which is a complicated multi-electron reaction, by hydrodynamic voltammetry. In addition, the catalytic activity of each metal species was clarified by reaction evaluation using disk electrodes. The research group was able to present new findings and methodologies for points that were overlooked in previous studies. Assistant Professor Kageshima hopes to develop more highly active electrode catalyst materials by next approaches such as appropriately alloying metals. By performing electrochemical analysis and spectroscopic analysis on the developed catalyst material as in this research, the group provides necessary information for the successful development of more highly active catalysts and elucidate more detailed principle of the reaction. The group hopes to develop highly efficient direct cellulose fuel cells in the future. 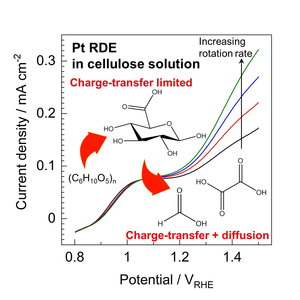 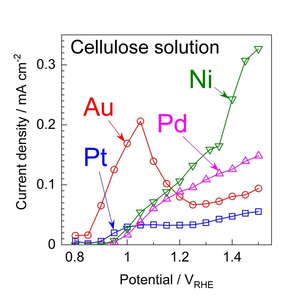