In two-dimensional (2D) systems, the coexistence of magnetism and nontrivial topological states can induce many novel physical phenomena. A typical example is the quantum anomalous Hall effect (QAHE), where the combination of ferromagnetism and topological insulator can generate a band gap in the bulk and gapless chiral edge states at boundaries. Owing to the dissipationless chiral edge states, QAHE is expected to have potential applications in ultralow-power consumption spintronic devices. QAHE was first proposed in a honeycomb lattice. Since then, people have made intensive studies on hexagonal and triangular lattices, and proposed some candidate materials to realize QAHE. In these materials, d orbitals of the transition metal usually play important roles in realizing QAHE. Two interesting questions then arise: whether can the QAHE be realized in other lattices, such as square lattice? Can the QAHE be obtained in materials with p orbitals?

Recently, a group led by Professor Gang Su from University of Chinese Academy of Sciences address these appealing issues by revealing a square lattice with the space group P/4n (No.85) that can accommodate three different p-orbital magnetic topological states, namely, the fully spin-polarized nodal loop semimetal, ferromagnetic semiconductor and QAHE. These three quantum states can be obtained by the symmetry and k·p model analysis, which can be implemented in 2D materials ScLiCl5, ScLiBr5 and LiScZ5 (Z=Cl, Br), respectively, because of their different spin-orbit coupling (SOC) parameters. It is shown that the ferromagnetism in these 2D materials is attributed to px and py orbitals of halogen elements. Unlike the pz orbital of graphene in low energy physics, where the SOC is between the next-nearest neighbor hopping with much small strength, px and py orbitals can provide large atomic spin-orbit coupling, leading to strong out-of plane magnetism. Therefore, these three systems have stable ferromagnetism with high Curie temperatures, which is calling for further experimental explorations. 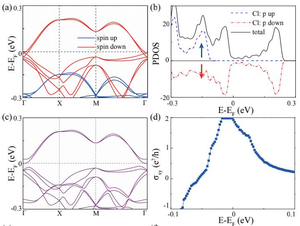