Turning cities’ wastewater into usable freshwater is an environmental win.

Engineering the system to be more energy efficient makes a good idea even better.

It’s an approach that’s potentially transformational, according to Arup SenGupta, a world-renowned researcher, educator, author, and inventor, who has dedicated his 35-plus-year career to developing solutions to problems relating to the lack of safe drinking water.

“Natural freshwater resources—lakes, rivers, groundwater—are under severe stress due to adverse impacts of climate change, coupled with gradually increasing population in metropolises around the globe,” says SenGupta, a professor of civil and environmental engineering and chemical and biomolecular engineering in Lehigh University’s P.C. Rossin College of Engineering and Applied Science. “Municipal wastewater treatment plants in large cities are insulated from the negative effects of climate change, and treated wastewater can serve as a potential water source, provided appropriate sustainable and cost-effective technologies are available.”

In 2019, SenGupta and his doctoral students at Lehigh were awarded a U.S. patent for their innovative CO2–driven ion exchange desalination process, HIX-Desal, which he calls “a legitimate candidate to transform wastewater into usable water.”

Existing wastewater desalination systems, such as those employed in California by the Orange County Water District in and the city of San Diego, use semipermeable reverse osmosis (RO) membrane processes that require a separate electrical and/or mechanical energy source. Approximately 1 to 1.5 kWh of energy is required to produce 1000 liters (264 gallons) of treated water, or just over the average amount three Americans use at home each day.

HIX-Desal harnesses the unique chemistry of CO2 to replace that energy requirement. And, SenGupta says, when paired with existing generators of carbon dioxide (such as cement plants and anaerobic waste digestion processes), the process can be effectively carbon negative.

“Carbon dioxide, which is safe to handle and nonhazardous, can serve both as a weak acid and a weak base concurrently in a single process for desalination,” he says, “avoiding the need for energy-intensive RO membrane processes.” The system also reduces water pretreatment required to protect the membrane in reverse osmosis setups, resulting in cost savings.

Initial studies of HIX-Desal were conducted on Lehigh’s doorstep in collaboration with the City of Bethlehem in Pennsylvania. SenGupta’s team, which includes graduate student Hao Chen, a P.C. Rossin Doctoral Fellow studying environmental engineering, and Nick Donato, an undergraduate research scholar, will gain new insight into the energy advantages and scalability of the technology in a new collaboration with the Lehigh County Authority’s wastewater treatment plan in neighboring Allentown.

The two-year project was recently funded by the U.S. Bureau of Reclamation, a federal agency under the U.S. Department of the Interior, as part of an $5.8 million investment in 22 laboratory and pilot-scale desalination research projects to enable broader deployment of desalination and recycled water technologies.

The Kline’s Island plant in Allentown treats nearly 35 million gallons every day, says SenGupta, and ongoing investigations show that the salinity of the treated wastewater can be reduced by more than 60 percent by the HIX-Desal process, without requiring any reverse osmosis. If successfully deployed using carbon dioxide from the facility’s anaerobic digester, he explains, the technology could lead to a savings of approximately 1 million kWh per day (or about enough energy to power 94 U.S. homes for a year).

Aditionally, recent tests confirmed another potential benefit: In July 2021, SenGupta's team collected samples of treated wastewater from the plant and completed the first cyclic process. The results, he says, revealed that the phosphate (responsible for algae growth and eutrophication) present in the plant’s wastewater can be selectively removed, concentrated, and recovered as a potential fertilizer in pure form, ready for direct field application.

Overall, SenGupta sees huge potential in validating that waste carbon dioxide, whether from landfills or gas turbine exhaust, can be used to desalinate municipal wastewater and water from other impaired sources (such as what's used for cooling applications in power plants or industrial facilities).

“This concept forms the basis of a circular economy, in which waste from one process is a potential resource in another process,” he says. “It’s a great challenge, but one that’s exciting as well.”

SenGupta received a bachelor’s in chemical engineering from Jadavpur University in Kolkata, India, and a master’s and doctorate in environmental engineering from the University of Houston. His research in environmental processes and sustainable materials has received recognitions from national and international organizations, including the Lawrence K. Cecil Award from the American Institute of Chemical Engineers in 2009, the Grainger Challenge Award from the National Academy of Engineering in 2007, the Intel Environmental Award for Technology Benefiting Humanity in 2012, and the VentureWell Sustainability Impact Award in 2016, among others. SenGupta currently holds ten U.S. patents and was the recipient of Lehigh University’s Libsch Research Award in 1995 and the Hilman Faculty Award in 2013. SenGupta is a fellow of the National Academy of Inventors, the American Institute of Chemical Engineers, and the American Society of Civil Engineers. 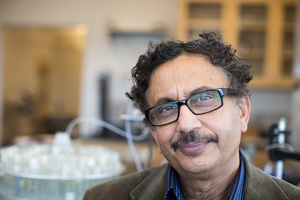