A study published Aug. 11 in the Proceedings of the Royal Society B by researchers at the University of Washington and Stony Brook University reports on how bats and pepper plants in Central America have coevolved to help each other survive.

The team — led by Sharlene Santana, a UW professor of biology and curator of mammals at the Burke Museum of Natural History and Culture — focused on the complex mixture of volatile organic compounds, or VOCs, produced by fruits on pepper plants in the genus Piper at prime ripeness. The study showed how these VOCs may have evolved to attract scent-oriented, short-tailed fruit bats from the genus Carollia, who then eat the fruits and excrete the seeds into the landscape.

Plant–animal interactions have captured the attention of biologists for centuries, and are key to maintaining the biodiversity of tropical ecosystems. The dispersal syndrome hypothesis — an explanation of how mutually beneficial relationships between plants and fruit-eating animals may lead to coevolution — proposes that, when animals are effective seed dispersers, they may select for fruit traits, including size, color and odor, that match their sensory abilities, such as vision and olfaction. But few studies have tested this hypothesis for complex traits like fruit scents. This research provides one of the first tests of bat-driven, fruit scent evolution.

The study is based on data collected during fieldwork at La Selva Biological Station in Costa Rica. There, Piper is highly diverse, with more than 50 recognized species. It is also a location where three Carollia species — C. castanea, C. sowellii and C. perspicillata — are some of the most abundant bats year-round and coexist with approximately 62 other bat species.

The team spent hundreds of hours searching and collecting ripe fruits from Piper to extract and quantify the VOCs that make up their fragrant scent. They also collected fecal samples from live bats and then released them back into the wild to determine which Piper species the bats were eating and how much. In addition, the researchers conducted behavioral experiments with wild bats where they offered options of unripe fruits enhanced with the most common VOCs found in local Piper plants. Video cameras and microphones recorded the bats’ feeding behaviors and echolocation calls.

The team found Piper fruit scent bouquets were complex and diverse. The authors identified and quantified 249 VOCs in ripe fruit scents across 22 Piper species. Some compounds were found in the fruit scent of most species — like alpha-caryophyllene, which has a spicy scent like cinnamon or cloves. Others, like 2-heptanol, were only found in a few Piper species. The diet experiments showed that, while the three Carollia fruit bat species varied in their reliance on Piper as a food source, all consumed a lot of a few Piper species, and a little of many others. Surprisingly, this was not related to how abundant the Piper species are at La Selva, so the bats must choose Piper fruits based on other characteristics and not just how well represented they are across the landscape. The team’s behavioral experiments provided some clues to what might be happening: Bats preferred samples spiked with 2-heptanol, a VOC found in the fruit scents of the Piper species they eat the most.

“These findings suggest bats use specific chemicals in the fruit scent bouquet not only to select ripe fruits, but to find the specific Piper species that make up the bulk of their diet,” said Santana, who is co-lead author on the study. “By helping them communicate with the bats, these chemical signals are likely a component of a dispersal syndrome in these plants.”

Through statistical and evolutionary analyses of the data on fruit scent chemistry and bat diet, the team further demonstrated that the evolutionary patterns of chemical diversity and the presence of specific compounds in Piper fruit scents is associated with greater bat consumption and scent preferences. This highlights the potential effect of bat fruit consumption on the evolution of fruit chemistry, a relationship that contributes to the extreme diversity of tropical fruiting plants worldwide.

“Flying in the dark means bats cannot find ripe fruit by sight, but rely on olfaction instead,” said co-author Liliana Dávalos, a professor at Stony Brook University. “Olfaction is the bridge between the plant signal and bat fruit consumption, and finding the specific VOCs bats respond to opens the door to matching olfactory receptor genes to important VOCs, which has been impossible until now.”

Understanding the relationship between bats and pepper plants not only contributes to knowledge about coevolution of these species, but also has benefits for rainforest habitat conservation. Piper are some of the first plants to grow in forest gaps and edges, and Carollia ― as key dispersers of Piper seeds ― can help restore plant life in logged areas.

“Our current and future work is identifying the odorant receptors that allow the bats to detect the fruit scents. This will allow us to link the ecology and evolution of these relationships with the physiological mechanisms,” said co-author Jeffrey Riffell, a UW professor of biology.

Co-lead author on the paper is former UW postdoctoral researcher Zofia Kaliszewska. Other co-authors are UW doctoral alum Leith Leiser-Miller, M. Elise Lauterbur at the University of Arizona and Jessica Arbour at Middle Tennessee State University. The research was funded by the National Science Foundation. 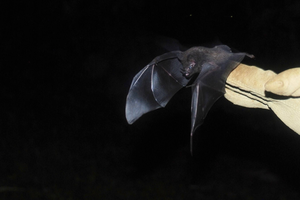