Human induced pluripotent stem cells (iPSCs) can be used to generate brain organoids containing an eye structure called the optic cup, according to a study published August 17 in the journal Cell Stem Cell. The organoids spontaneously developed bilaterally symmetric optic cups from the front of the brain-like region, demonstrating the intrinsic self-patterning ability of iPSCs in a highly complex biological process.

Many aspects of human brain development and diseases can be studied using 3D brain organoids derived from pluripotent stem cells, which can give rise to all cell types in the body. Researchers previously used human embryonic stem cells to generate the optic cup, which gives rise to the retina—the light-sensitive layer of tissue at the back of the eye. Another study demonstrated that optic-cup-like structures can be generated from iPSCs, which are derived from adult cells that have been genetically reprogrammed back into an embryonic-like pluripotent state.

In the past, the production of optic cups from pluripotent stem cells focused on generating the pure retina. Until now, optic cups and other 3D retinal structures had not been functionally integrated into brain organoids.

To achieve this feat, Gopalakrishnan and his team modified a protocol they previously developed for turning iPSCs into neural tissue. The human brain organoids formed optic cups, which appeared as early as 30 days and matured as visible structures within 50 days. This time frame parallels that of retinal development in the human embryo and could make certain types of developmental neurobiology experiments more efficient.

Across 16 independent batches from four iPSC donors, the researchers generated 314 brain organoids, 72% of which formed optic cups, showing that the method is reproducible. These structures contained diverse retinal cell types, which formed electrically active neuronal networks that responded to light. The optic cup brain organoids also contained lens and corneal tissue and exhibited retinal connectivity to brain regions. “In the mammalian brain, nerve fibers of retinal ganglion cells reach out to connect with their brain targets, an aspect that has never before been shown in an in vitro system,” Gopalakrishnan says.

In future studies, they plan to develop strategies to keep the optic cups viable for long time periods, using them to investigate mechanisms that cause retinal disorders.

This work was supported by the German Research Foundation and by the Fritz Thyssen Foundation. 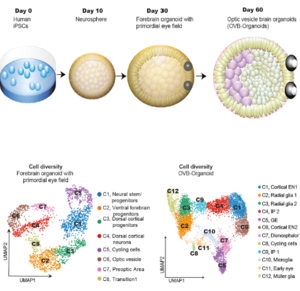