For the first time, researchers have used video cameras and GPS devices attached to albatrosses—instead of more logistically challenging techniques using ships and planes—to track the spread of plastic pollution in the ocean.

Their findings appeared on May 25 in the journal Scientific Reports.

Awareness has grown considerably in recent years of the problems that ocean plastic pollution poses to many sea-going organisms. However, tracking the amount of such debris and its distribution remains difficult due to the heavy logistical difficulties involved with such mapping. Currently, monitoring large sea debris requires direct observation across vast areas. For smaller items, net tows conducted from shipsare necessary.

Such at-sea surveys are extremely costly and as a result, few studies have been able to track changes in debris distribution and abundance over time.

The logistical and cost challenges have also meant that there is very little information available about the overlap between the spread of plastic pollution and the marine wildlife at risk as a result of this pollution. Understanding this overlap is essential if we are to be able to identify those locations where plastic pollution poses the greatest threats to marine organisms, particularly to larger animals such as seabirds who might ingest or even become entangled in the debris.

In recent years, however, the cost of video cameras and GPS equipment has declined precipitously, allowing an uptick in the feasibility of “bio-logging”, or using such devices attached to animals to perform the tracking instead.

“Even just a few years ago, it would have been prohibitively expensive,” said Bungo Nishizawa, a postdoctoral fellow with Japan’s National Institute of Polar Research and lead author of the study. “But recently, we’ve seen animal-borne image loggers collect data on the ingestion of food, interactions with predators, and the presence of fishing vessels. So we thought we could use similar techniques to track plastic pollution.”

The researchers attached GPS and video cameras to black-footed albatrosses and used these devices to capture thousands of video clips across wide swathes of the north Pacific near Japan’s Izu island chain. On average, the birds flew almost 1,000km per trip, 250km of which were at sea.

The imaging showed that debris encountered by the albatrosses included styrofoam, plastic sheets, and fishery netting and ropes. Much of this waste had barnacles and seaweed attached, suggesting the plastic creates a “platform” for potentially invasive species to spread to new territory.

The region the albatrosses surveyed is also home to the northward flowing Kuroshio Current, which had previously been shown to play a key role in the transport of plastics across this part of the ocean. The physical processes that caused the high rates of encountering debris in this area by the birds is unclear, but the researchers suspect that slower currents could contribute to the plastic’s greater persistence, in turn allowing better detection by flying seabirds.

The albatrosses also changed flight direction toward debris at an average distance of 4.9km, which is the identical distance at which they turn and approach prey. The birds also spent as much time manipulating plastic debris as they normally do feeding on natural prey such as squid and fish. This could mean that for any given trip, the amount of food and thus energy gained is reduced compared to normal because the birds mistake garbage for prey.

Having demonstrated that this biologging technique works for plastic debris-tracking across a wide area, the researchers now want to step up their game and use it to start examining what types of debris are most attractive to these or other birds, and which is most likely to be ingested. Ultimately, the team wants to extend the technique to be able to map and predict the distribution of similar marine debris around the world. 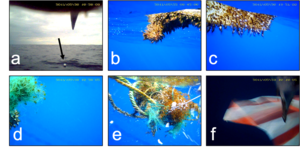