Polyacetylene (PA) is one-dimensional carbon chain with alternating single and double carbon-carbon bonds, which is also the first synthesized conductive polymer. Although the structural unit is simple, the control on molecular weight and stereochemistry of PA chains are challenging via conventional acetylene polymerization pathway. Interestingly, normal alkanes (n-alkanes) present the same carbon skeleton as all-trans PA. Direct alkane dehydrogenation has been intensively explored in petrochemical processes to produce industrial chemicals like mono-olefins and dienes. Nevertheless, as the dehydrogenation reaction proceeds, the chemical selectivity to generate double bonds loses with a handful of uncontrolled side reactions such as isomerization, cyclization and aromatization. Recently, Prof. Lifeng Chi’s group from Soochow University (China) with collaborators from Karlsruhe Institute of Technology (KIT, Germany) made exciting progress on selective dehydrogenation of n-alkanes which directly transformed a single n-alkane molecule into the corresponding all-trans conjugated polyene molecule (the all-trans PA segment with a determined chain length) under surface constraints. In analogy to the nomenclature of [n]-annulenes, the researchers term the transformed molecule to be [n]-polyene where the letter ‘n’ indicates the number of carbon atoms involved.

The difference between intact n-alkane and [n]-polyene molecules are unambiguously illustrated by bond-resolved scanning probe microscopy (STM/nc-AFM) including their bond order, periodicity, the preferred adsorption site and their relative adsorption height on Cu(110) as shown in Fig. 1. Complementary spectroscopic characterizations including infrared reflection adsorption spectroscopy (IRRAS) and temperature program desorption (TPD) provide even more reaction details and verification of thermal stability during the thermal conversion from saturated C-C bonds to unsaturated C=C bonds. The polymerized polyene networks have also been examined by angle resolved photoemission spectroscopy (ARPES) which indicates a metallic band dispersion evolved from the insulating paraffin films on Cu(110).

Combined with the density functional theory (DFT) calculations, the researchers further clarified a cascade process in this transformation as presented in Fig. 2, and revealed that the stereospecificity in the reaction derived from the epitaxial adsorption of generated alkenyl groups. The decisive step of n-alkane dehydrogenation is found to be the activation of terminal methyl. As the dehydrogenation proceeds and double bonds form, the optimized adsorption site of reactants changes gradually from the groove site to the neighboring ridge site together with a stepwise decline of dehydrogenation barriers. Moreover, n-alkane molecules that are confined above the copper ridges (less favored) would experience a much lower activation barrier and undergo transformation in priority compared with molecules in their optimized adsorption site (groove site).

The proposed methodology is also applicable for alkyl-substituted functional molecules and other crystal planes of copper under rational precursor design. Due to the anchoring effect of functional groups, the alkane chain is pulled towards the catalytic surface resulting in a dramatic reduction of the reaction temperature, for example that 2-dodecylnaphthalene has been found to spontaneously undergo polyene-transformation under hours of room temperature annealing. Meanwhile, there is no significant change in the temperature threshold for the activation of terminal alkenyl coupling, which made it possible to construct polyene complex with programmable length and functionality through single or multiple components (Fig. 3).

To summarize, the researchers clarified a cascade process of alkane dehydrogenation under surface constraints which directly transform n-alkane molecules into the corresponding all-trans conjugated polyenes with unprecedented length controllability and programmable functionalities. It has been proved feasible for integrating molecular functional units and constructing complicated molecules in conjugation, which provides opportunities to build up molecular topology, molecular circuits and even organic superconductivity. The authors also expected that the investigations in the context together with the clarified steric effect in the transformation would provide brand new perspectives towards the utilization of alkane feedstocks and become constructive in the rational design of real catalysts based on nanocrystalline and/or zeolites.

From n-alkane to polyacetylene: ultimate control of stereochemistry and conjugation length 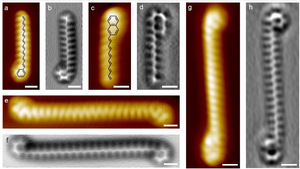