Getting a full understanding of how genes are regulated is a major goal of scientists worldwide. Now, a Florida State University professor and his research partners have developed a technique that can map out nearly all of the likely regulatory switches across a genome.

That knowledge could prove critical for the agriculture field where scientists are constantly trying to improve crop yield by making different plants, such as corn or wheat, more resistant to external forces like drought, flooding or plant viruses.

“Knowledge of the landscape of the genome structure should help focus genome editing and accelerate larger applied research efforts such as those guiding precision agriculture and medicine,” said Professor of Biological Science Hank Bass.

The research is published in PLOS Genetics.

Regulatory switches, controlled by transcription factors, are almost like light switches for genes. All genes have specific functions, but some only are on briefly during different stages of development. When that process goes awry, it could disrupt a plant’s ability to develop correctly or fight off disease.

“By creating a robust, precise map of regulatory sites and transcription factors in maize, gene expression can be optimized by targeting these sites,” said Savannah Savadel, the first author on the paper and an FSU alumna who is now in medical school at Baylor College of Medicine. “This could mean healthier plants, higher nutrient content, better growth or drought resistance, which is an especially important concern in areas where farming is difficult.”

Knowing where a transcription factor binds to the gene allows researchers to understand the biochemistry of gene regulation in both normal and pathological contexts.

Corn is a complicated plant that has been studied by hundreds of researchers because it is a good model genetic species that can also help shed light on the genetics of other plants. The corn genome has about two billion base pairs — units of double stranded nucleic acids that are the building blocks of DNA. For comparison, humans have about 2.9 billion base pairs.

Bass and his colleagues used their technique, called MOA-seq, to map DNA sequences in small chunks of about 30 base pairs. The method extracts cell nuclei and applies an enzyme that functions as a probe. It diffuses into the nucleus and identifies areas of the DNA that are open to modification by transcription factor binding.

Narrowing the DNA map to smaller footprints of 30 base pairs would allow researchers to use gene editing tools such as CRISPR to modify specific areas of the gene.

“We found the light switches with high precision in a proof-of-concept test tissue, the developing ear of a maize plant,” Bass said. “The ability to get down to this sequence level means you can look for genetic variation within the binding sites for these switches. This enables precision agriculture.”

Bass has been refining the chromatin sensitivity profiling technique over the past decade. He worked on this paper with Thomas Hartwig, a researcher from the Max Planck Institute in Germany, who proposed a collaboration after attending a workshop Bass gave that taught researchers how to use the method. Savadel performed many of the experiments as part of her Honors in the Major Thesis at Florida State.

The native cistrome and sequence motif families of the maize ear 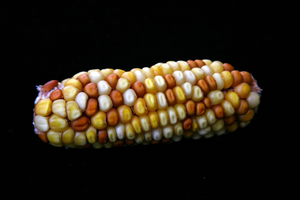