Botanists at Texas Tech University recently tested a new genetic resource on plants from the Guadalupe Mountains, a region that boasts some of the most diverse ecosystems in Texas. Called Angiosperms353, the resource has the potential to help unravel the 500-million-year history of land plants while also providing a conservation roadmap to protect vulnerable species into the future.

It was with this last goal in mind that researchers sequenced the DNA of plant specimens collected nearly 50 years ago, when the Guadalupe Mountains were first designated a national park. The researchers published their results in the journal Applications in Plant Sciences.

“By comparing them to modern specimens, we can try to figure out exactly how rising temperatures and changes in weather and land use have affected these populations,” said lead author Madeline Slimp, who conducted the study while completing her bachelor’s degree at Texas Tech.

The Guadalupe Mountains are a hotbed of genetic diversity

Located in the northern spur of the Chihuahuan Desert, the Guadalupe Mountains are the remains of an ancient coral reef and limestone seafloor that was uplifted by tectonic instability in the region beginning about 20 million years ago. Within that span of time, the peaks have been thrust up to over 5,000 feet above the surrounding sand dunes.

This abrupt change in elevation allows a number of rare plant ecosystems to thrive in the desert, including temperate forests, grasslands, dry slopes of cactus and creosote, and peaks crowned with firs and pine. Their distance from other ranges, such as the Rockies to the north or the Apache Mountains to the south, has also meant that many of the native plants have evolved there in isolation and can be found nowhere else on Earth.

“It’s by nature extremely diverse,” Slimp said. “There are a lot of endemic and unique specimens in that area as well as species that are at their furthest northern extent.”

Prior to its designation as a national park, the area had been used for agriculture, with a large portion dedicated to goat livestock that heavily grazed on the rare and endemic plants.

When the land was granted protected status in 1966, biologists jumped at the opportunity to study the native flora and fauna, including two botanists who compiled an extensive inventory of everything that grew in the park. Over the course of several years, they took copious notes and collected over 3,000 specimens, with multiple individuals of the same species, that they stored for later use.

Now, nearly 50 years later, researchers are returning to the Guadalupe collections with the goal of seeing how genetic diversity has changed over time in the region.

“We can learn something about the health of a population from the amount of genetic diversity there is within a species,” said Matt Johnson, director of the E.L. Reed Herbarium at Texas Tech and senior author on the study. “This can tell us whether a particular species is in peril.”

Obtaining DNA from old plant material isn’t always easy, however; as soon as a cell dies, its contents begin to break down, which includes DNA. Collectors and curators slow down this process of degradation by keeping specimens in herbaria, repositories where plants are stored in cool, dry conditions. But ultimately, they can only forestall the inevitable.

But recent advances in technology are allowing scientists to reliably retrieve DNA strands from old specimens. Researchers now regularly sample from plants collected more than 100 years ago, before anyone fully understood what DNA was or how it carried genetic information from one generation to the next.

Preserved DNA offers a glimpse into the past

The techniques used in the new Angiosperms353 genetic toolkit are particularly well-suited for sifting through old, degraded DNA, and the meticulously curated Guadalupe collection presented the perfect opportunity for Slimp and her colleagues to give it a test run.

To get the widest snapshot of diversity, they strategically chose key specimens from among the more than 1,000 plant species that grow in the Guadalupe Mountains. “We chose 24 species that represent a large breadth of natural history types, including grasses, trees, shrubs, and forbs,” Slimp said.

Although the study was meant only to provide a preliminary look at past ecosystems within the park, the results of their DNA analyses revealed patterns that would have been impossible to determine from plant surveys or abundance estimates alone.

Species with small distributions, for example, are often the first to be regarded for conservation efforts. But several species restricted to areas in and around the Guadalupe Mountains, such as sandpaper oak, great sage, and mock orange, were revealed to have had surprisingly high amounts of genetic diversity. All things being equal, the more genetic diversity a species has, the more likely it will be able to adapt to changes in climate over long periods of time.

But the isolated environments of the Guadalupe Mountains, ringed on all sides by the Chihuahuan Desert, may act as a constricting vise on future plant populations. As the Earth’s climate becomes warmer, plants move up in elevation, offsetting the increase in temperature, Slimp said.

As a result, an increasing number of plants compete for limited space, and those already adapted to environments at the highest elevations are left stranded. “They may have nowhere to go once it gets too hot,” Slimp said. “We might lose a ton of biodiversity in this area.”

Now that Slimp and her colleagues have established a baseline for comparison, their next step will be sequencing the DNA of plants currently growing in the mountains to assess how the genetic health of their populations has changed during the intervening years.

“With these results, we can go back and resample the park using Angiosperms353,” Slimp said. “By better understanding what we currently have, we can get an idea of what we need to do in the future to conserve these species.”

Applications in Plant Sciences (APPS) is a monthly, peer-reviewed, open access journal focusing on new tools, technologies, and protocols in all areas of the plant sciences. It is published by the Botanical Society of America (www.botany.org), a nonprofit membership society with a mission to promote botany, the field of basic science dealing with the study and inquiry into the form, function, development, diversity, reproduction, evolution, and uses of plants and their interactions within the biosphere. APPS is available as part of the Wiley Online Library (https://onlinelibrary.wiley.com/journal/21680450).

For further information, please contact the APPS staff at apps@botany.org.

On the potential of Angiosperms353 for population genomic studies

From coral reef to goat ranch: Uncovering the botanical history of the Guadalupe Mountains 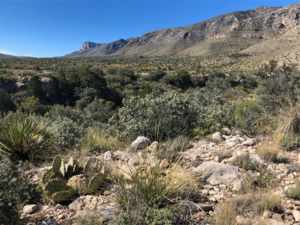 Scrubland of the Chihuahuan Desert