Ottawa, August 19, 2021 – Among the fierce carnivores that lived during the late Cretaceous was a predator named Daspletosaurus. The massive tyrannosaur, about nine metres long, lived in the coastal forest of what is now Alberta around 75 million years ago---preceding the more famous T. rex by about 10 million years.

For the first time, scientists in Canada and Argentina have used CT scans to digitally reconstruct the brain, inner ear, and surrounding bones (known as the braincase) of two well-preserved Daspletosaurus specimens.

Their results, published online today in the Canadian Journal of Earth Sciences, counter a prevailing view that dinosaur brains and the bones enclosing and protecting them varied little within species, or among closely related species, especially when compared with changes observed in other parts of the skeleton. “Our study with the two Daspletosaurus specimens suggests otherwise,” explains Dr. Tetsuto Miyashita, palaeontologist with the Canadian Museum of Nature and senior author of the study.

“We know that tyrannosaurs had relatively good-sized brains for a dinosaur, and this study shows that this pattern holds for Daspletosaurus. Furthermore, based on the shapes of the brain, ear structure, and braincase, we suggest that these two specimens represent distinct species of daspletosaurs.”

Access to a braincase, the internal part of the skull that surrounds and protects the brain, helps unlock one of the most complex parts of dinosaur anatomy. This requires advanced medical technology such as a CT scanner to image the internal spaces hidden underneath thick bones, with the resulting hundreds of hours of work to reconstruct the brain and other fleshy parts slice by slice. Therefore, most studies on dinosaur brains have each focused on one specimen from a representative species of the group. As an exception, Tyrannosaurus rex has several such reconstructions of their brains. Now, this new study investigates two remarkably well-preserved skulls of Daspletosaurus, a much rarer tyrannosaur than T. rex.

One belongs to the original specimen of Daspletosaurus, which is prominently displayed at the Canadian Museum of Nature in Ottawa. Unearthed in 1921 along the banks of Alberta’s Red Deer River, its description in 1970 as Daspletosaurus torosus (“muscular frightful lizard)” by Dr. Dale Russell ushered in the modern era of research on tyrannosaurids. The second specimen, uncovered in 2001, is with the Royal Tyrrell Museum of Palaeontology in Alberta. Miyashita is continuing to study it with Dr. Philip Currie of the University of Alberta, another author of the study.

Study of the braincase structure and its endocranial cavity provides insights on the brain itself, as well as characteristics such as the layout of cranial nerves, and some aspects of the sensory biology such as auditory and visual anatomy that drove the life of the dinosaur.

Dr. Ariana Paulina Carabajal, a dinosaur braincase expert in Argentina and study co-author at the Instituto de Investigaciones en Biodiversidad y Medioambiente (CONICET-Universidad Nacional del Comahue), provided the detailed models of the brain and inner ear anatomy and related structures. Among the findings were the presence of large bony canals that would have transmitted thick nerve bundles that moved the eyeballs. The researchers also describe large air sacs that filled up most of the braincase bones, which is in line with the limited studies known of other tyrannosaurs.

“These cavities within the bones not only make the huge skull lighter, but also are related to the middle region of the ear,” explains Paulina Carabajal. “The cavities probably helped to amplify sound and assist the system that communicates to the left and right ears, allowing the brain to determine where a sound is coming from.”

Yet, even within the two braincases of Daspletosaurus, there were differences. “It was surprising to see so many variations in the braincases even though the skeletons are similar,” says Miyashita, who offers that their study provides a good reason to look at more braincases within similar groups of dinosaurs, or even within species.

“Researchers have looked inside so few braincases in dinosaurs, typically one each for whatever species they studied, that this reinforced the assumption that these structures don’t change much within and among species. We just haven’t looked inside enough skulls to document variation.”

Additional authors of the paper, entitled “Two braincases of Daspletosaurus (Theropoda: Tyrannosauridae): anatomy and comparison”, are Thomas Dudgeon, and Dr. Hans Larsson of McGill University, who contributed the scanning data for the Canadian Museum of Nature specimen. The study authors are grateful to the Montfort Hospital in Ottawa, the University of Alberta Hospital in Edmonton, and the Canada Diagnostic Centre in Calgary for access to their CT scanners.

About the Canadian Museum of Nature
Saving the world through evidence, knowledge, and inspiration! The Canadian Museum of Nature is Canada's national museum of natural history and natural sciences. The museum provides evidence-based insights, inspiring experiences and meaningful engagement with nature's past, present and future. It achieves this through scientific research, a 14.6 million specimen collection, education programs, signature and travelling exhibitions, and a dynamic web site, nature.ca. 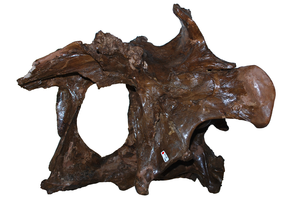 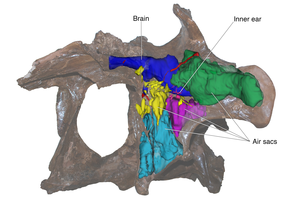 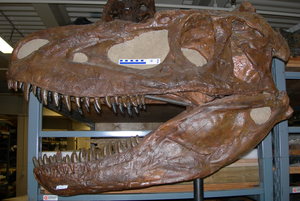