Ice losses from Thwaites Glacier in West Antarctica are currently responsible for roughly four percent of the global sea-level rise. This figure could increase, since virtually no another ice stream in the Antarctic is changing as dramatically as the massive Thwaites Glacier. Until recently, experts attributed these changes to climate change and the fact that the glacier rests on the seafloor in many places, and as such comes into contact with warm water masses. But there is also a third, and until nowone of the most difficult to constrain, influencing factors. In a new study, German and British researchers have shown that there is a conspicuously large amount of heat from Earth’s interior beneath the ice, which has likely affected the sliding behaviour of the ice masses for millions of years. This substantial geothermal heat flow, in turn, are due to the fact that the glacier lies in a tectonic trench, where the Earth’s crust is significantly thinner than it is e.g. in neighbouring East Antarctica. The new study was published today in the Nature online journal Communications Earth & Environment.

Unlike East Antarctica, West Antarctica is a geologically young region. In addition, it doesn’t consist of a large contiguous land mass, where the Earth’s crust is up to 40 kilometres thick, but instead is made up of several small and for the most part relatively thin crustal blocks that are separated from each other by a so-called trench system or rift system. In many of the trenches in this system, the Earth’s crust is only 17 to 25 kilometres thick, and as a result a large portion of the ground lies one to two kilometres below sea level. On the other hand, the existence of the trenches has long led researchers to assume that comparatively large amounts of heat from Earth’s interior rose to the surface in this region. With their new map of this geothermal heat flow in the hinterland of the West Antarctic Amundsen Sea, experts from the Alfred Wegener Institute, Helmholtz Centre for Polar and Marine Research (AWI) and the British Antarctic Survey (BAS) have now provided confirmation.

“Our measurements show that where the Earth’s crust is only 17 to 25 kilometres thick, geothermal heat flow of up to 150 milliwatts per square metre can occur beneath Thwaites Glacier. This corresponds to values recorded in areas of the Rhine Graben and the East African Rift Valley,” says AWI geophysicist and first author of the study, Dr Ricarda Dziadek.

Based on their data, the geophysicists are unable to put a figure on the extent to which the rising geothermal heat warms the bottom of the glacier: “The temperature on the underside of the glacier is dependent on a number of factors – for example whether the ground consists of compact, solid rock, or of metres of water-saturated sediment. Water conducts the rising heat very efficiently. But it can also transport heat energy away before it can reach the bottom of the glacier,” explains co-author and AWI geophysicist Dr Karsten Gohl.

Nevertheless, the heat flow could be a crucial factor that needs to be considered when it comes to the future of Thwaites Glacier. According to Gohl: “Large amounts of geothermal heat can, for example, lead to the bottom of the glacier bed no longer freezing completely or to a constant film of water forming on its surface. Both of which would result in the ice masses sliding more easily over the ground. If, in addition, the braking effect of the ice shelf is lost, as can currently be observed in West Antarctica, the glaciers’ flow could accelerate considerably due to the increased geothermal heat.”

The new geothermal heat flow maps are based on various geomagnetic. field datasets from West Antarctica, which the researchers have collated and analysed using a complex procedure. “Inferring geothermal heat flow from magnetic field data is a tried and tested method, mainly used in regions where little is known about the characteristics of the geological underground,” explains Fausto Ferraccioli from the British Antarctic Survey and the Istituto Nazionale di Oceanografia e di Geofisica Sperimentale (OGS), one of the study’s co-authors.

The experts will soon find out how accurate their new assessment of the heat flow below Thwaites Glacier is. An international team led by British and American polar experts, which the AWI is also taking part in, is currently engaged in a major research project. In this context, collecting core samples down as far as the glacier bed and taking corresponding heat flow measurements are planned. The findings will provide the first opportunity to comprehensively verify the new heat flow maps from West Antarctica. 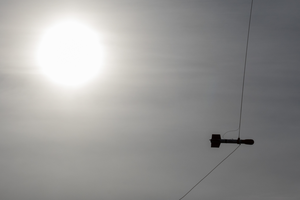 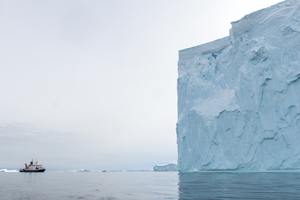 RV Polarstern near an iceberg in Amundsen Sea