Much like in human society, female hummingbirds have taken it into their own hands to avoid harassment. By watching white-necked Jacobin hummingbirds in Panama, researchers discovered that over a quarter of females have the same brightly colored ornamentation as males, which helps them avoid aggressive male behaviors during feeding, such as pecking and body slamming. This paper appears August 26 in the journal Current Biology.

“One of the ‘aha moments’ of this study was when I realized that all of the juvenile females had showy colors,” says first author Jay Falk (@JJinsing), who is now a postdoc at the University of Washington but led the research as a part of the Cornell Lab of Ornithology and Smithsonian Tropical Research Institute. “For birds that’s really unusual because you usually find that when the males and females are different the juveniles usually look like the adult females, not the adult males, and that's true almost across the board for birds. It was unusual to find one where the juveniles looked like the males. So it was clear something was at play.”

Male white-necked Jacobin hummingbirds are known to have bright and flashy colors, with iridescent blue heads, bright white tails, and white bellies. Female Jacobins, on the other hand, tend to be drabber in comparison, with a muted green, gray, or black colors that allow them to blend into their environment. Falk and his team, however, found that around 20% of adult females have showy colors like males.

As juveniles, all females have the showy colors, but this 20% of females doesn’t change to the muted color as they age. It is not clear whether this phenomenon is genetic, by the choice of the hummingbird, or due to environmental factors. However, the researchers found that it is probably the result of the female hummingbirds trying to evade harassment, including detrimental aggression during mating or feeding.

“Hummingbirds are such beloved animals by many people, but there are still mysteries that we haven’t noticed or studied,” says Falk. “It’s cool that you don’t have to go to an obscure unknown bird to find interesting and revealing results. You can just look at a bird that everyone loves to watch in the first place.”

The authors received financial support from the Smithsonian Tropical Research Institute, the National Science Foundation, the Cornell Lab of Ornithology, the Cornell Department of Neurobiology and Behavior, the Society for the Study of Evolution, the American Society of Naturalists, and the Sigma Xi Society

Female hummingbirds avoid harassment by looking as flashy as males 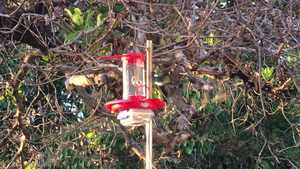