An international team of researchers used historical museum collections to study the effects of human-made antibiotics over the entire history of their application. They found that the increased use of antibiotics in medicine and agriculture in the 1950-1990s led to increases in antibiotic resistance in wild Swedish brown bears. However, they also detected a clear downward trend in antibiotic resistance after national policies to control antibiotic use were implemented.

The study is published in the scientific journal Current Biology.

Antibiotic resistance is a major global health threat and hundreds of thousands of people die each year because of infections with resistant bacteria. Antibiotics and resistant bacteria, e.g., from hospitals, can escape into the environment through wastewater treatment plants and spread by water and wind over large distances. From there, they can be picked up by wild animals, which in turn can transmit resistant bacteria to humans during recreational activities or hunting. However, studying how antibiotic resistance has changed in wildlife since the start of antibiotic mass-production in the 1940s has not been possible until recently. Now, scientists have used specimens from museum collections to analyse changes in the bacterial communities that live in the mouth of wild animals and preserve as solid calculus deposits on teeth. This dental calculus can remain unchanged for millennia, which allowed the study of historical bacterial communities, the microbiomes, from Swedish brown bears as old as 180 years.

“We specifically looked for bacterial genes that provide resistance to antibiotics,” says Jaelle Brealey, a postdoctoral researcher at NTNU in Norway and lead author of the study. “Their abundance closely follows human antibiotic use in Sweden, increasing in the 20th century and then decreasing in the last 20 years. We also find a greater diversity of antibiotic resistance genes in the recent past, likely as a result of different kinds of antibiotics being used by humans.”

Scandinavian brown bears usually live far away from humans but sometimes approach villages and cities. The researchers expected to find more antibiotic resistance genes in bears that lived in more densely populated regions of Sweden. However, to their surprise, no such relationship was observed.

“We found similar levels of antibiotic resistance in bears from remote areas and those found near human habitation. This suggests that the contamination of the environment with resistant bacteria and antibiotics is really widespread,” says Katerina Guschanski, lead senior author of the study with joint appointments at Uppsala University and the University of Edinburgh.

Sweden was one of the first countries to implement strict control measures for the use of antibiotics, introducing a ban on antibiotics in agriculture in the mid 1980s and a national strategic program against antibiotic resistance in medicine in 1995. These measures seem to have taken effect. Oral bacteria of bears that were born after 1995 show low antibiotic resistance, albeit not as low as in bears that lived before humans started antibiotic mass-production. Only the comparison of microbiomes through time could uncover these changes.

“Our study highlights once again the value of historical museum collections, like the one at the Swedish Museum of Natural History, as a unique resource for understanding the effect of recent human actions on the environment,” says Daniela Kalthoff, curator of the museum and a co-author on the study.

Historical microbiomes could be used to not only investigate the past but also to monitor environmental changes in response to new strategies for reduction of contamination and pollution. This study provides an encouraging example for how governmental policies can be effective in mitigating a major health threat on a national level. It showcases that human actions, both negative and positive, have a profound effect on the environment. 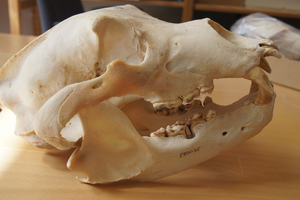 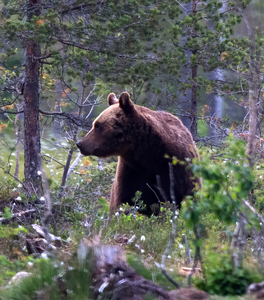