When its batteries are fully charged, an electronic device will normally indicate that they are at 100% capacity. However, this value only represents 70-90% of the theoretical energy density that can be stored in the batteries, owing to the permanent loss of Li ions that occurs during the initial charge in the stabilization (formation) stage of battery production. By preventing this initial loss of Li ions, the mileage of electric vehicles (EVs) and usage time of smartphones can be drastically increased.

In an effort to overcome this issue, a joint research team at the Korea Institute of Science and Technology (KIST), led by Dr. Minah Lee from the Center for Energy Storage Research, Dr. Jihyun Hong from the Center for Energy Materials Research, and Dr. Hyangsoo Jeong from the Center for Hydrogen-Fuel Cell Research, has developed an electrode pre-treatment solution capable of minimizing this initial Li ion loss in graphite-silicon oxide (SiOx, 0.5 ≤ x ≤ 1.5) composite anodes. After being dipped in the solution, the anode, which was composed of 50% SiOx, demonstrated negligible Li loss, enabling a full cell to exhibit near-ideal energy density.

While most commercial Li batteries utilize a graphite anode, SiOx has been garnering significant attention as a next-generation material for anodes due to its high capacity, which is 5-10 times greater than graphite. Yet, SiOx also irreversibly consumes three times as much active Li as graphite. As a result, a composite electrode, consisting of a mixture of graphite and SiOx, is now gaining recognition as an alternative for practical next-generation anodes. However, while there was a corresponding increase in the capacity of graphite-SiOx composite electrodes at higher ratios of SiOx, there was also an increase in loss of initial Li. Consequently, the ratio of SiOx content in a graphite-SiOx composite electrode was limited to 15%, as increasing the ratio to 50% would result in an initial Li loss of 40%.

To simultaneously achieve high capacity and high initial efficiency, scientists proposed various prelithiation methods involving the pre-doping of extra Li into the anode. Dr. Minah Lee’s research team at KIST developed a process wherein the electrode is dipped into a unique solution to mitigate Li consumption by the SiOx electrode. The team then applied this process to a graphite-SiOx composite material with significant commercialization potential.

The research team found that the pre-treatment solutions developed previously would cause the unintended insertion of solvent molecules with Li ions into the graphite, owing to the graphite’s versatile intercalation capability. This intercalation of large solvent molecules resulted in the structural breakdown of the graphite-SiOx composite electrode. To prevent electrode failure, the researchers developed a new solution using a weakly solvating solvent to reduce the interaction between the solvent and the Li ions. This solution enabled the selective insertion of Li ions into the active materials, ensuring a stable supply of additional Li to the graphite-SiOx composite electrode.

The initial Li consumption was completely prevented after the graphite-SiOx electrode was immersed in the solution developed by the research team for approximately 1 minute, even at a 50% SiOx ratio. Consequently, the electrode showed a high initial efficiency of nearly 100%, indicating negligible Li loss (≤ 1%) in the initial charge. Electrodes developed through this process had a capacity 2.6 times higher than conventional graphite anodes, while also maintaining 87.3% of the initial capacity after 250 charge-/discharge cycles.

Dr. Minah Lee from KIST gave the following statement: “As a result of this study, we should be able to increase the SiOx content in graphite-SiOx composite anodes to over 50%, as opposed to the 15% ratio allowed by conventional materials, making it possible to produce lithium ion batteries with a greater capacity and improve the mileage of future EVs.” Dr. Jihyun Hong, a co-researcher at KIST, also said, “The technology is safe and suitable for mass production, and therefore is likely to be commercialized.”

This study was funded by the Ministry of Science and ICT through KIST’s institutional research program, and the National Research Foundation of Korea’s Basic Research Program (for young and mid-career researchers) and Climate Change Response Technology Development Project. The findings of this study were published in the latest edition of the Journal of the American Chemical Society (IF:15.419, top 6.621% in the JCR field, DOI: https://doi.org/10.1021/jacs.1c03648).

An innovative process which prevents irreversible energy loss in batteries 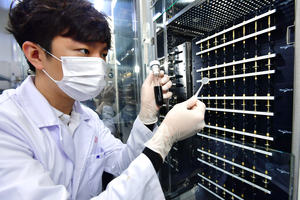 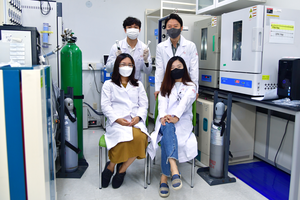 Research Team at the Korea Institute of Science and Technology